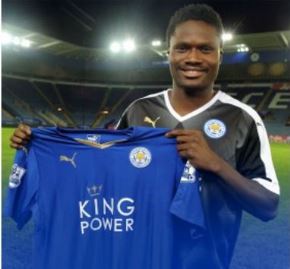 Ghana defender Daniel Amartey has been finally unveiled by English top-flight side Leicester City, 24 hours after Ghanasoccernet.com exclusively revealed that the centre-back had sealed the dream move.
Ghana’s leading football news outfit revealed on Thursday that the talented youngster had sealed the deal and was just awaiting the press conference to announce his capture.
The Foxes finally announced the deal on Friday
The deal is worth £6million with the Ghana international expected to complete formalities in the next couple of hours.
Leicester boss Claudio Ranieri has moved to further strengthen his shock title challengers by adding the hugely talented Ghanaian to his roaster.
Versatile Amartey, 21, is able to play in defence as well as midfield.
He has won six international caps and has played 63 times for his club since joining them in 2014.
Claudio Ranieri finally has his man after raving about his qualities this week.
The highly-rated versatile Ghanaian is expected to fight for a place in the title challenging Leicester squad.
The African could mark his debut this weekend against Stoke City at the Liberty stadium.
Born in Ghana, Amartey was scouted by current Estonia national team coach Magnus Pehrsson, who signed him for Swedish club Djurgarden in 2013.
After a successful spell with Djurgarden, Amartey joined FC Copenhagen in July 2014, where he made 63 appearances.
He was also part of the Ghana squad that were runners-up at the 2015 African Cup of Nations, losing the final to Ivory Coast after a penalty shoot-out.