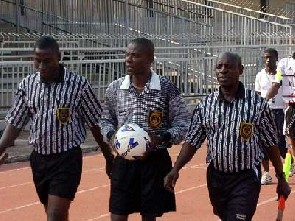 L .O Laryea, former chairman of the Referees Association of Ghana (RAG), has assured football loving fans of the Ghana Premier League (GPL) excellent officiating from the selected referees for the upcoming 2015/16 season.
Ghanaian referees have been brandished names for been incompetent and accept bribes to influence matches.
During the 2014/15 First Capital Plus Premier League (FCPPL) season there were pick pocket of incidence where referees were deemed to have accepted money to influence games.
Recently in season curtain raiser – the super clash between League champions Ashgold and Fa cup winners, Medeama the Miner’s accused referee David Lartey of bad officiating after a goal was denied.
The former FIFA referee and head of the referees association of Ghana, referees are fallible like all human but that can’t be used as an excuse.
“In the 2014/15 season the referees performed better and proved many critics wrong and it’s based on this I assure all fans and premier league clubs of an even better officiating in new season”, he said.
The RAG are currently finalising an arrangement to organise a two-week refresher course for the 40-selected referees and 40-assistants as they prepare for the upcoming season.