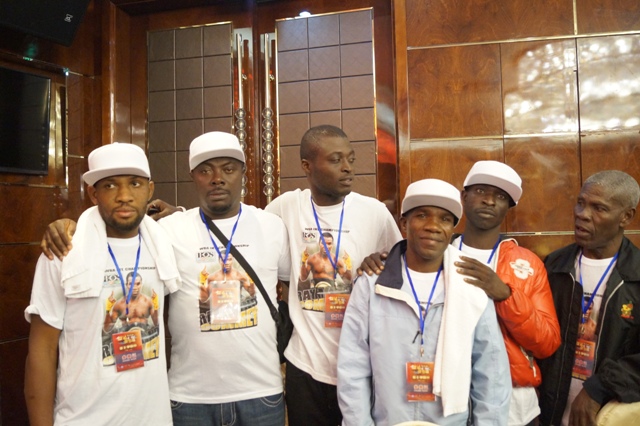 The duo went to the Asia continent with the aim of stunning their opponents, Xiao and Bo respectively, instead losing the WBA international super bantamweight and the vacant WBC Youth World super lightweight belts.

Tackie Annan watches on as his opponent is declared winner

It was Annan who fought earlier on the card against Bo in their super lightweight contest. The Ghanaian lost via TKO in round one after he suffered a left shoulder injury.

After Tackie’s unfortunate loss, the spotlight was on his countryman Commey to prove his worth against his opponent Xiao who was fighting in front of a boisterous home crowd.

The Ghanaian started on a good note, landing to the body and head of Xiao but that didn’t trouble the China native as on most occasions he used his reach to his advantage to curtail Commey’s attacks.

Xiao started gathering momentum in the middle rounds, giving Commey the business as the Ghanaian began showing signs of fatigue.

Xiao was in total control by the championship rounds, tearing through Commey’s defense with a series of left and right hooks but the steel-chinned Ghanaian remained upright, fighting back with counters but ultimately not enough to stem the tide.

At the end all the three judges scored the fight 118-109 advantage the Chinese fighter.