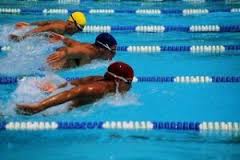 The President of the Ghana Swimming Association (GSA), Mr. Theophilus Edzie has said Ghanaians should expect medals in swimming at the 2024 Olympic Games.
Though Ghana abounds in a lot of talents in Swimming, the country has not been able to win laurels in the sport due to several challenges, hence the decision to develop the “Vision 2024” agenda .
Mr. Edzie in an interview with the media said “to win an Olympic medals requires understanding that its a long term project, we in swimming realized this last four years and decided to forecast on a long term project called Vision 2024”.
He said there was the need for the association to build it infrastructure base as a starting point before proceeding to organising training programmes for coaches to equip with the modern techniques in the sport in order to make the vision 2024 an achievable one.

According to Mr. Edzie, it will then afford them the chance to unearth and train more swimmers for the nation.