If God permits I might be GFA prez but..– Frank Nelson 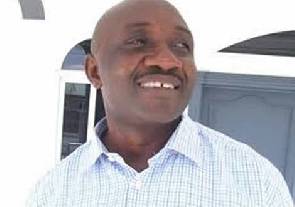 Ghana Football Association (GFA) executive committee member, Frank Nelson Nwokolo has revealed his admiration to head the association in the near future should he be called upon and his belief in God agrees with the decision.
The GFA presidency seat has become an attractive brand since current head, Kwesi Nyantakyi was elected as president in 2005 after FIFA had issued an ultimatum to Ghana to fix her football challenges.
Frank Nelson who doubles as a board member of premier league club, Accra Heart of Oak admitted his rise to the top of Ghana football has been a smooth one but will still take it a step at a time as he is not overly zealous to contest for the presidency.
In an interview with sportscrusader.com, Mr. Nelson said, “I am not too ambitious in terms of getting to the top as I like things to go on smoothly and naturally but it is God who makes a king. Today I am the chairman of the national U-20 management committee, a member of the exco and chairman of the marketing and event committee of the GFA.”
He added, “I didn’t force my way up there but if tomorrow the mantra falls on me to head the association and it aligns with the will of God then I don’t think I will be able to turn down God’s offer.