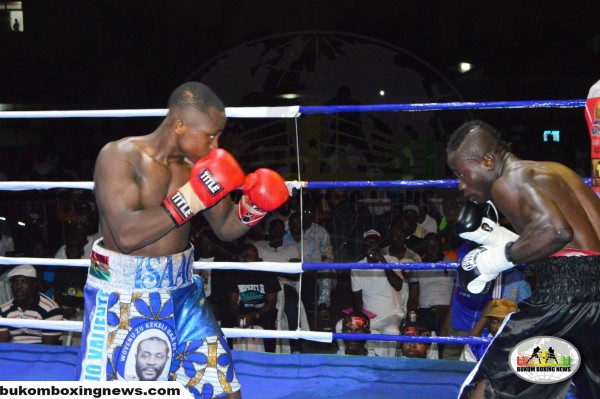 Headlining the inaugural promotion of Aborigines Beach and Resorts Promotions – a card televised by network TV Africa – there was pressure on Dogboe to perform and he delivered.

Dogboe delighted fight fans in the arena with the kind of skill that has caused none other than “Professor” Azumah Nelson to declare him a future world champion. The 22-year-old Dogboe has already claimed two continental titles and is primed for a successful career if properly maneuvered. The race to stardom is oft-times a marathon and not a sprint.

Thus far, Dogboe is off to a good start. It was Pappoe who entered the ring first, dancing to the tunes of Ghana Dancehall icon Shatta Wale. Dogboe followed a few minutes later, flanked by a church band who ushered him in with Gospel.

Both boxers received warm applause as they were introduced by ring announcer Mohammed Amin-Lamptey. The defending champion went to work early in the first, landing a series of uppercuts to the head of Pappoe but the challenger, who looked to be the far bigger man when they squared off, was able to withstand the pressure.

The two combatants fought at a fast pace in the early rounds but it was the diminutive Dogboe playing the role of aggressor, landing the cleaner, eye-catching blows. Pappoe broke through with several shots but couldn’t deter Dogboe’s assault.

Dogboe, an Olympian switched from an orthodox stance to a southpaw midway through fight, showing another facet to his game. Pappoe’s struggles continued. A ferocious right uppercut in the tenth drove the challenger to the canvas in the 10th. But Pappoe’s Bukom pride was on display as he beat the count and re-entered the fray with both fists swinging.

Sensing he needed a knockout to win, Pappoe stood his ground and exchanged with the champion but the damage had already been done and Dogboe continued to dominate to the final bell. All three cards read 120-107 in favor of the champion.

Isaac Sackey scored a first round KO over Seidu Amadu in their bantamweight contest billed for eight rounds.

Sheriff Quaye crashed out Jonathan Nii Akrofi in round two in their lightweight contest scheduled for eight rounds.

The card opener featured Nathaniel Nukpe scoring a five round KO over Ezekiel Annan in their lightweight contest billed for six rounds.