Hearts of Oak to cash in on huge Japanese support 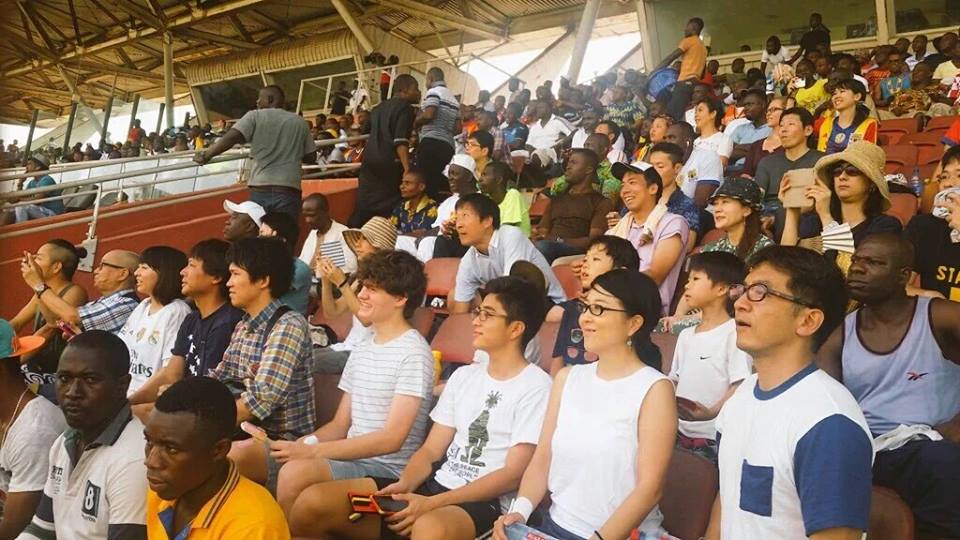 Japanese supporters in their numbers at the Accra Sports Stadium

Ghanaian giants Hearts of Oak must put in more efforts to court their newly-found Japanese supporters and cash in by the opportunity presented by making it count to generate more revenue for the Accra-based club.

Large numbers of Japanese surprisingly turned up at the Accra Sports Stadium on Sunday to cheer the Phobians to victory over New Edubiase in their opening match of the season.

The Japanese turned up clearly in support of the Phobians because of the presence of their compatriot Kenichi Yatsuhashi who was in charge of the capital club in his first official match.

Hundreds of Japanese were seen in one of the stadium’s VIP areas as they shouted and chanted PHOOOBIA!!!!!!

“We came over to watch football, obviously. But we are here to support our countryman Kenichi Yatsuhashi,” one of the Japanese supporters said.

While Hearts can boast and brag over this achievement of attracting Japanese fans, the real chance is for the club to take advantage of the committed fans who spend money in the cause they believe in.

Already Hearts have benefited from signing Yatsuhashi as a Japanese company is their electronics partner Polar who is providing heart monitoring equipment for their training of the Phobians. This deal was brokered by the coach.

The real deal is for the Phobians to engage the larger Japanese community through their embassy to court more sponsorship from some of their big companies in Ghana.

But the Phobians will have to also cash in on the fans who have got the penchant for buying the real quality products like shirts and other such memorabilia to boost clubs’ finances.

This is what European clubs have done by signing Japanese players in the past which has turned out to boost their tickets and jersey sales while Japanese companies entered in as club sponsors.

Japanese footballers are still a rarity in Europe’s top leagues and, unlike his international teammate Yuto Nagatomo, Honda was thrown in immediately at the deep end with top flight Italian football.

The hype surrounding his arrival in AC Milan was largely fabricated by club vice-president, Adriano Galliani, placing a great deal of pressure on Honda’s shoulders and intensifying media attention. With these factors in mind, it was impressive to see Honda settling in less than a year since arriving.

His new found confidence coincided with his impact for his national team. Despite competition from Shinji Kagawa for the limelight, Honda is still very much the focal point for the Samurai Blue. His precision passing, excellent interchange with his teammates and deadly accuracy from free kicks make him arguably Japan’s most valuable asset.

Still followed by millions of Japanese fans, Honda is also one of the most marketable football figures in Asia.

Italian newspaper Corriere Dello Sport recently claimed Milan have made approximately €5 million from the sale of Honda shirts and other such memorabilia.

Many fans knew prior to his arrival at AC Milan from CSKA Moscow that this was as much a marketing ploy as anything else, particularly when he was handed the number ten jersey by Galliani.

A saturation of media coverage followed and the San Siro welcomed more and more Japanese fans. It would be very hard to say objectively that bringing Honda to Milan had nothing to do with expanding their fan base in Asia.

This is what Hearts must take advantage of by engaging the Japanese community by tapping into their interest in football and getting revenue from gate tickets, replica sales and other memorabilia.