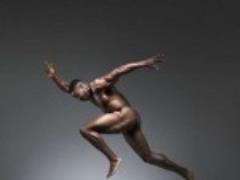 ‘I want to be like superman,’ says Harry Aikines-Aryeetey, smiling as he looks over the images taken by Sportsmail’s chief sports photographer Andy Hooper.
‘I like wings,’ adds the British sprinter, referring to the tattoo on his back. ‘I want to fly. I have a big Superman comic canvas over my bed which says “This looks like a job for Superman”.’
Every sinew of Aikines-Aryeetey’s sculpted body is geared towards his ‘ultimate aim’: running fast. The circumference of his thighs is 25 inches and his body fat is just three per cent.
Aikines-Aryeetey, 27, can lift more than 31 stone, despite weighing around 13st 5lb, but his main concern is making sure he does not become too bulky.
He must achieve a fine balance between maximising his power but staying lean and only does ‘one or two’ gym sessions every week.
The former world 100m junior champion is also asthmatic, with tests showing he uses just 51 per cent of his lung capacity if he does not use an asthma pump.
The world 4x100m bronze medallist, who competes in Glasgow over 60 metres on Saturday, freely admits he is ‘as vain as it comes’ but insists that, given the scandals currently thwarting his sport, athletes have a responsibility to showcase the ‘good stuff’ about track and field.
‘I’ve never touched a drug in my life and look at the way I look,’ says Aikines-Aryeetey.
‘I feel like this captures exactly what we work for.’
‘It’s nice to show that side of our sport, especially in an Olympic year.
‘In light of all the nonsense going on, this is the time for athletes to shine.’
‘It’s all about the Olympics, getting in that British team and making the 100m final and getting a medal in the relay.’
‘I definitely haven’t tapped into my potential yet, but I’m excited to see what I can run this year.’
Credit:Daily Guide