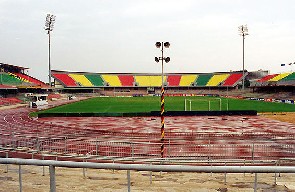 Government has completed drawings for the construction of a new sports stadium at New Edubiase in the Ashanti region, President John Mahama has revealed.
“In addition to the construction of the Cape Coast stadium, which has been completed, we have completed the drawings and bills of quantities for the construction of the New Edubiase Sports Stadium,” Mr Mahama told Parliament Thursday February 25 while delivering his State of the Nation Address.
This will bring to six the number of sports stadia in the country.
Presently, the country can boast of the Accra, Kumasi, Essipong, and Tamale sports stadia, and the yet-to-be inaugurated Cape Coast Sports Stadium.
New Edubiase boasts of a premier league club called New Edubiase United.
The club currently uses the Obuasi Len Clay stadium as their home grounds, but will have a place to call their own when the stadium is completed in the future.
Mr Mahama, however, did not state when construction work will begin.