AshGolf Out Of Champions League 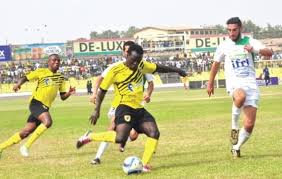 Ashgold were beaten 1-3 in the CAF Champions League 2nd leg against M.O Bejaia on Sunday

Ashgold managed to defend well and curtailed the attacking threats of the Algerian opposition during the first 45 minutes.

Fatau Dauda was magnificent in the first half by making some important saves to deny M.O Bejaia the chance to restore their lead.

However, M.O Bejaia back from recess doubled up their effort and scored two goals in the 2 half of the game to see them into the 1 round of the CAF Champions League.

Ashgold won the first leg a fortnight ago at Obuasi by a goal to nothing, but the 3-1 defeat means the end of the road for the Miners.

In 6 different elimination encounters in the Champions Cup now the Champions League, no Ghanaian outfit has ever finished the home and away ties smiling and Ashgold couldn’t rewrite history.

In all African Inter Club Competitions Ghanaian clubs have met Algerian sides in 12 knockout games and Accra Hearts of Oak remain the only side that avoided elimination against a side from Algeria. That was in 1982 Cup Winners Cup: Hearts of Oak lost the away encounter 2-1 and won the home tie 2-0 against USK Algiers. Clubs like Ghapoha, Wise, Hearts of Oak in 1993 and 1995, Kotoko, Ashgold have all fallen victim to Algerian elimination before.