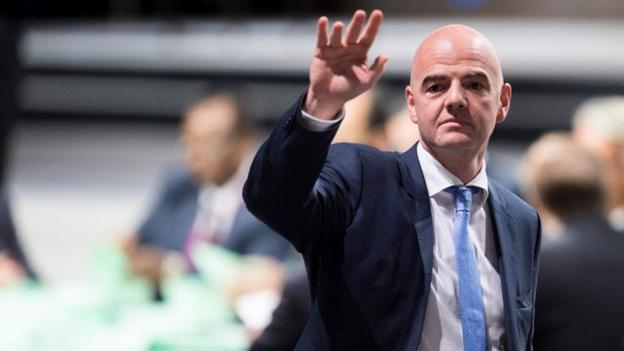 New Fifa president Gianni Infantino has denied that promises to the United States over who will host the 2026 World Cup secured his election win.

US Soccer Federation head Sunil Gulati switched his vote to Infantino in the second round of Friday’s voting.

“I spoke with many delegates… trying to tell them that they should vote for football and for me,” Infantino said.

Asked if he made promises to Gulati about the 2026 tournament, he added: “No, certainly not.”

In the second round of voting, Uefa general secretary Infantino picked up 27 extra votes.

Following the election at Fifa’s extraordinary congress in Zurich on Friday, Gulati said: “We told Gianni that we would support Prince Ali but also gave him the assurance that when it mattered we would be with him.”

Bidding processes for the 2026 World Cup were postponed in the summer amid a corruption crisis that has engulfed Fifa since last May.

That decision was taken after the way the 2018 and 2022 tournaments were awarded, to Russia and Qatar, became part of an ongoing Swiss criminal investigation.

Outgoing president Sepp Blatter has suggested there was an agreement in place for Russia to host the 2018 event before the vote took place.

Speaking to the BBC, Infantino also insisted that overhauling the structure and running of Fifa following the crisis must be “implemented from day one, immediately”.

The Swiss begins his role on Monday and says key reforms passed in Zurich to make Fifa more transparent and accountable are his priority.

“Seriously, first is the reforms,” Infantino said. “So I will go up to the office and start looking at how to implement these reforms so that we can hopefully very soon concentrate on football.

“We have to look forward. You have to start as of now to live the reforms. Already, as of now, and for the future, so there’ll be no issues anymore.

“As for the past we have to make sure we co-operate fully with the authorities to ensure everything comes out if something has happened.”

The reforms include limiting the president to three terms in office, the disclosure of salaries, and replacing Fifa’s current executive committee with a new council featuring a female representative from each confederation.