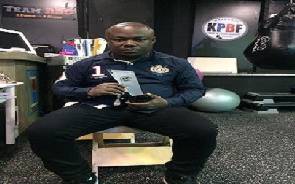 Ghanaian boxing promoter, Collins Bio-Donkor has sealed a deal with Korean boxing investors to build a boxing arena in the country.
The facility, according to him, will be for the underprivileged children in Ghana.
Mr Bio-Donkor, who is also the president of Gh Bosslink Sport Promotions, said the deal could also include staging boxing events with boxers from Korea.
The agreement was reached when the Ghanaian boxing promoter paid a visit to the President of Asia Kickboxing Federation, Hwang Hyun Ki, who is also the owner of Team RSC Boxing Promotions.
He also met with Young Choi, the Korean inventor who created Ice Tube, the bio-thermoregulation technology which turns human temperature into energy, and also had talks with the President of Korean Pro Boxing Federation, Hyung Byung Hun.
Mr Hun assured that he will give Ghanaian boxers a free venue for a boxing promotion in Korea and possible shots at Pan Asian Boxing Association (PABA) belts.
“Indeed, plans are far advanced for Mr Hwang to lead a team of boxers from the Asian country on a training tour to Ghana in March as guests of Gh Bosslink Sport Promotions,” Mr Donkor said.
He mentioned that another group of investors who will be led by Jang Woo Lee, manager of Ice Tube, will also visit to finalise an agreement between the two regarding a boxing promotion to be held in Ghana and also inspect the site where the Gh Bosslink boxing gym will be built.
“We hope to use boxing to eradicate the problem of street kids, those who lack parental support, [sic] drop out of school and stuff like that,” Mr Donkor explained.