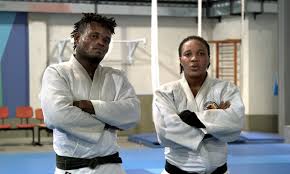 The judoka, who are seeking asylum from the conflict-riven Democratic Republic of the Congo, are being considered in a new category of refugee athletes
Popole Misenga and Yolande Mabika: ‘I will win a medal on behalf of all refugees’

When Popole Misenga and Yolande Mabika fled the Democratic Republic of the Congo three years ago and sought asylum in Brazil, they hoped to escape history. This summer, they may end up making it instead as refugee athletes competing in the Olympic Games for a flag rather than a nation.

The judoka, who are seeking asylum in Brazil from their conflict-riven homeland, are being considered for selection in a new category of refugee athletes who will participate under the banner of the International Olympic Committee.

It is an exciting prospect for the young martial arts specialists, who initially feared they had left their sport as well as their homeland behind when they made a risky asylum bid during the 2013 World Judo Championships in Rio.

That was a huge gamble. At the time, they did not know the city, the language, any of the locals, or the laws for asylum; all they knew was that they could no longer tolerate national coaches who locked them up when they lost and sometimes failed to feed them for two days in a row. There were also deep-seated concerns about a homeland that had been racked by violence since their childhood.

Both come from Bukavu in the east of the DRC, the area worst affected by the deadliest conflict in modern African history. The 1998-2003 war and its aftermath left more than 5 million dead and millions more without a home.

Misenga said he had to flee after his mother was killed and his brother went missing. “I wondered sometimes how to live when so many people were dying,” he recalls. Although peace has been declared in the DRC, the violence continues, particularly ahead of elections such as the one due next year, Misenga says. “Even in Kinshasa, the military of our country comes to do only one thing: kill,” he says. “I’ve seen too much war, too much death. I do not want to get into that. I want to stay clean so I can do my sport.”

Both say that judo has helped them forget the horror of war and the sadness of leaving families and loved ones behind.

“Judo is my life. It helped me escape war, to take another path,” says Mabika. But her attempt to focus on her sport only goes so far when she must also cope without family, work, money, and a home of her own. “I cannot cry every day. I have cried a lot already in my home country. This is all very hard for me.”

Their situation is shared to varying degrees by an estimated 20 million refugees around the world. But for the more talented athletes among them, this summer’s Olympics could provide a solution.

At last year’s UN general assembly, International Olympic Committee chief Thomas Bach announced that refugees will be invited to participate at the Games for the first time. He urged all member states to identity competitors who might be able to reach Olympic standards. “This will be a symbol of hope for all the refugees in our world, and will make the world better aware of the magnitude of this crisis,” he said.

Of the 8,500 refugees in Brazil, Misenga and Mabika are the only two who have a chance to compete, according to the Catholic charity Caritas, which provides support to refugees.

A final decision has yet to be made, but the possibility of entering the Olympics has already given a new purpose to the two judoka. After a more than two-year break, they are now training three times a week at the Instituto Reação in Jacarepaguá with members of the Brazilian team. It is a long haul. The journey takes more than two hours each way.

Among the many challenges they face is the adjustment to a different sporting culture. Veteran Brazilian coach Geraldo Bernardes said there were initial misunderstandings because they had not previously been taught the difference between training and competition. In their home country they were punished by being locked in a room any time they lost. This made them very aggressive in every head-to-head encounter.

“In the beginning this created a clash between them and our judoka. They complained that they were being pushed and pulled. We had to explain that their training partners were protecting them from falls. It took some time, but now they get on OK,” he said. “The more time passes, the more sociable is the atmosphere. Our guys see that they are human beings who deserve our attention and our support, regardless of color, creed, religion and nationality. We are here to help and to all be brothers.”

“Their previous treatment seemed to be subhuman. Here, everyone supports them,” Bernardes says. “It’s not as much support as they deserved, but we embrace them with affection, and we’re doing all we can to ensure they can participate at the 2016 Olympics.”

The judoka have encountered prejudice elsewhere. The judoka say they have had trouble finding work and accommodation, even near their home in the Pina de Bras community, which has a high number of migrants from Africa.

Misenga has a place of his own, but Mabika still has to rely on the hospitality of friends. She often feels lonely and unhappy. “It’s hard,” she says.” I long for my family, my mother, my brother. I have no news of them. Nobody tells me anything. It’s so sad.”

Both are now determined to secure a place at Rio 2016, which they hope will be a life-changing experience.

“If my family see me on television, I can give my number, everything. Because I want one day to talk even with my dad and my brothers,” she said. “If I participated in the Olympics, I think it would change my life.”

Misenga, who has already been endorsed by the Brazilian Olympic Committee, has even higher hopes.

“I represent everyone,” he says. “I’ll get a medal for all refugees.”