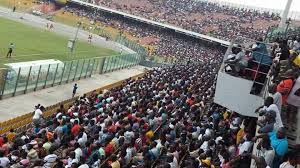 Hearts of Oak will have to adopt a home ground for their Ghana Premier League matches if the Accra Sports Stadium is closed down later this month.
The Sports Minister Nii Lante Vanderpuye revealed disclosed that the stadium would have to be closed down for massive renovation works.
That decision is yet to be communicated but authorities want to start after Ghana’s 2017 Africa Cup of Nations qualifier against Mozambique.
If confirmed, Hearts might consider the El Wak Stadium in Accra or the Ho Stadium.
This will be a huge blow for the club who have begun brining fans to the stadium after a winning start to their season.