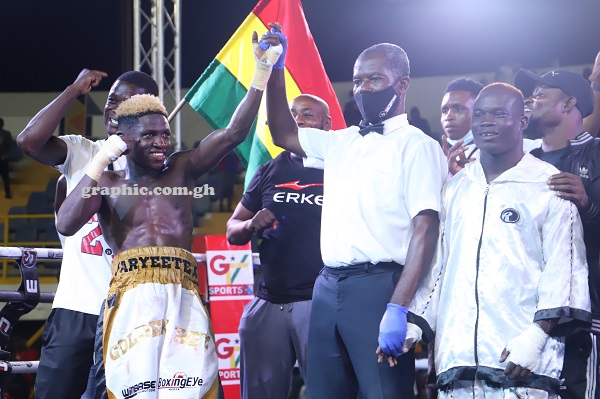 Aryeetey earned a 60-55 scores on all three judges scorecards to carry the night in an entertaining bout.

In an interview with the Graphic Sports after the bout, the 18-year-old praised his opponent for putting up a good show and said he was looking forward to his next bout.

Aryeetey explained that his target is to win the national title and will be working hard to achieve that in subsequent bouts.

“He gave me a good fight and I have to praise him for his efforts,” said Aryeetey. “I have to return to the gym and keep working hard for the next fight.

“I am getting closer to the national title and that is the focus at the moment. It is only a matter of time for me to achieve that and I am determined to continue working harder towards that,” he added.

Aryeetey and nemesis Isaac started the bout with trading of punches. The first round saw an action packed event as both fighters went in for the attack but Aryeetey was more aggressive.

In the second round, Isaac started chasing Aryeetey but the latter was always effective with his jabs to keep his opponent at bay.

The third round resumed with both boxers throwing more combinations. As Aryeetey managed to land clean punches, Isaac failed with most of his shots.

In rounds four and five, the action-packed show turned to clinching from the fighters with numerous slips and head collision.

Aryeetey however started working on the body of Isaac who kept coming at him until the rounds ended.

Isaac was determined to finish the bout on a high note to prove a point and chased Aryeetey throughout the round.

But a smart Aryeetey refuses to stand and used his jabs to keep Isaac away to ensure an emphatic win.

In a bout that was promoted by Winbase Promotions and dubbed ‘Jamestown Fight Night’, Michael Decardi Nelson and Moses Adjei Selvi finished their bantamweight clash in a draw.

The exciting bout ended in a 57-56, 57-57 and 58-57 on the scorecards with many viewing it as a fair results following the their thrilling encounter.

However, Benjamin Lamptey recorded a third round knockout victory over William Commey in a 12-round lightweight contest.

Jacob Dickson stopped David Okine in three rounds of their cruiserweight clash and Godwin Kofi Appiah lost a round one    contest to Enoch Tetteh at featherweight.