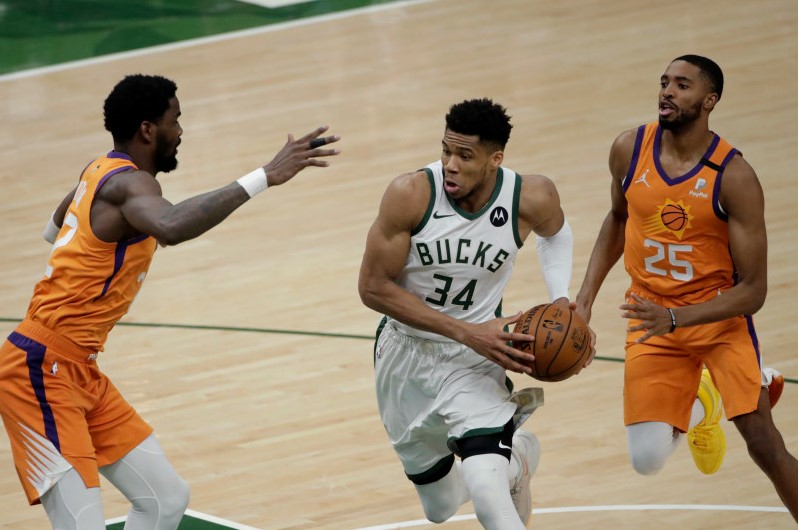 Khris Middleton scored 40 points, including 10 straight for the Milwaukee Bucks down the stretch to send them past the Phoenix Suns, 109-103 in Game 4 of the NBA Finals.

Middleton’s hot hand and a big block from Giannis Antetokounmpo gave the Bucks their second straight victory in the first close game of the series.

Antetokounmpo had 26 points, 14 rebounds and eight assists. His streak of two straight 40-point games ended but the only number that matters for the Bucks is on the series scoreboard. Devin Booker had 42 for Phoenix, which hosts Game 5 on Saturday.

The Milwaukee Bucks tied the 2021 NBA Finals at two games apiece with a dramatic 109-103 victory over the Phoenix Suns in Wednesday’s Game 4 at Fiserv Forum. Khris Middleton and Giannis Antetokounmpo led the way for the Bucks, who continued the pattern of the home team taking every contest of this series with their second successive win.

A brilliant showing from Devin Booker wasn’t enough for the Suns, who will look to regroup with the series returning to Phoenix for a critical Game 5.

Everything begins and ends with Antetokounmpo for the Bucks, and Wednesday was the opportunity to continue what was shaping up to be a legendary NBA Finals performance.

In fact, his back-to-back showings of more than 40 points in Games 2 and 3 had people talking about Michael Jordan’s historic 1993 Finals showing against the Suns. Yet, the biggest difference from the Game 3 win and initial losses was the supporting cast’s ability to take advantage of all the defensive attention he draws.

While Jrue Holiday was brutal from the field (4-of-20), Middleton more than picked up the slack as the only Bucks starter to make a three-pointer. It was because of his individual efforts that the home team remained even within striking distance as Booker dominated on the offensive end and Antetokounmpo was missing some of the aggressiveness that defined the early portion of this series.

He scored 10 straight points for the Bucks in the final three minutes, which helped turn a tie game into a momentum-swinging victory. Pat Connaughton also hit a clutch three before Middleton’s stretch, and Antetokounmpo turned heads with a memorable block on a Deandre Ayton dunk attempt, but it was the Middleton show when the game was on the line for Milwaukee.

If his team goes on to win the championship, his showing will go down in NBA history.

Coming into Wednesday’s contest, the biggest storyline from Phoenix’s perspective was how Booker would bounce back after playing just 29 minutes and scoring 10 points on 3-of-14 shooting during the Game 3 loss.

The visitors couldn’t have scripted a better start for Booker on Wednesday.

Booker sliced his way through Milwaukee’s defense and unleashed a number of midrange shots on his way to 20 first-half points to anchor his team’s attack. However, the game was still tied at intermission despite his dominance because nobody else on the Suns had more than seven points, including Chris Paul and Ayton.