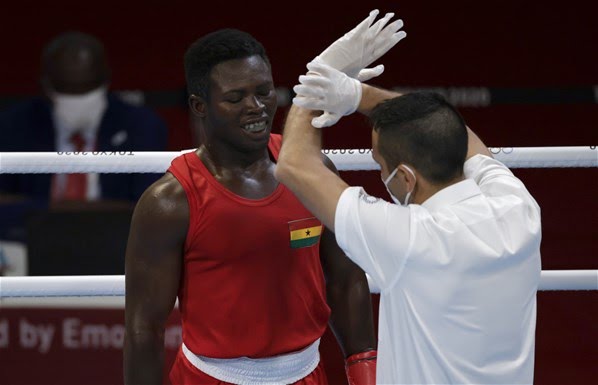 Shakul Samed has become the first Ghanaian boxer to bow out of the Tokyo 2020 Olympic Games having lost in the last 16 [light heavyweight division] to Bayram Malkan from Turkey through a second round technical knockout at the Kokugikan Arena in Tokyo on Wednesday.

Bayram, an orthodox boxer from the Fenerbahce SK Boxing Club in Istanbul simply outclassed his Ghanaian opponent in the first round and scored 4 of the 5 referees.

Born into a family of boxers having watched his elder brothers – Bastie Samir and Issah Samir represent Ghana at the 2008 Olympic Games in Beijing, Shakur could not perform any magic in the second round.

Malkan’s right hand shot in just one minute, twenty-three seconds into the second round dropped the Ghanaian boxer from the Wisdom Boxing Gym Club in Accra, forcing Argentine referee Vilarino to stop the contest.

Meanwhile, two Ghanaian boxers – Sulemanu Tetteh and Samuel Takyi have both progressed to the quarterfinal phase.