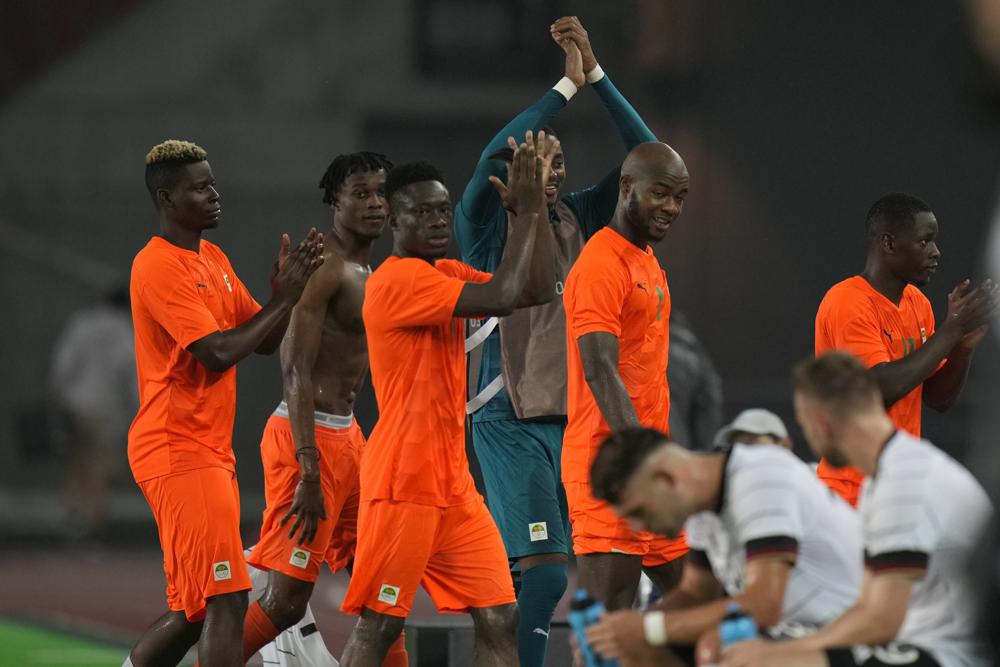 Ivory Coast qualified for the quarter-finals of the men’s football tournament with a 1-1 draw with Germany on day five of the Tokyo Olympics.

Earlier on Wednesday, there was disappointment for South Africa’s Chad le Clos as he finished fifth in the 200m butterfly.

Nigeria men’s basketball suffered their second loss in Tokyo at the hands of Germany but there is victory for Egypt in the men’s handball as they boast their chances of reaching the last eight.

Ivory Coast’s men drew 1-1 with Germany to progress to the quarter-finals as the runners up from Group D as their opponents crashed out of the tournament.

The Ivorians took the lead when Benjamin Henrichs deflecte the ball into his own net in the 67th minute as he was put under pressure by Youssouf Dao.

A superb free-kick from substitute Eduard Lowen from the edge of the area saw the Germans draw level just six minutes later but it was not enough for his side.

Ivory Coast will find out their opponents for Saturday’s quarter-final later on Wednesday when the winners of Group C are decided.

In their other games, Ivory Coast beat Saudi Arabia 2-1 and drew 0-0 with Brazil, who finished top of Group D.

South Africa’s Chad le Clos was aiming for a second Olympic gold medal to go with the one he won at the same event in London but could only finish fifth in the 200m butterfly.

The gold went to Kristof Milak of Hungary ahead of Japan’s Tomoru Honda with Frederico Burdisso of Italy winning bronze.

Le Clos rose to fame when he won his first at the London 2012 Games by beating the great Michael Phelps.

The 29-year-old has another chance to win a medal in Tokyo when he races in the heats of the 100m butterfly on Thursday.

He has won silver in the event at the last two Olympics. Le Clos is aiming to win a fifth Olympic medal overall in his bid to become South Africa’s most decorated Olympian.

Later on day five Le Clos’ compatriot Tatjana Schoenmaker goes in heat four of the women’s 200m breaststroke as she looks to add to the silver medal she won in the 100m breaststroke on Tuesday.

Nigeria’s men lost 99-92 to Germany in their second Group B Game to follow their loss on Sunday 84-67 at the hands of Australia.

Jordan Nwora, who plays for NBA champions the Milwaukee Bucks, was the top scorer for Nigeria with 33 points

D’Tigers, who had high hopes going into the Games after wins over the USA and Argentina in their warm-up games, have one final group game on Saturday against Italy.

Egypt’s men beat hosts Japan 33-29 to record their second win at Tokyo 2020 and moved into third place in Group B.

Next up for Egypt are Sweden, who have won all their matches at the Olympics so far, on Friday before their final encounter with Bahrain on Sunday.

Wednesday’s victory have given the Egyptians a good chance of finishing in the top four of the six-team group and so progress to the Olympic quarter-finals.

Next up for Takyi will be Colombia’s Ceibar Avila, who beat Zambia’s Everisto Mulenga in the last 16, on Sunday when a win will guarantee he wins at least a bronze medal.

Mozambique’s Rady Garmane is in a similar position in the women’s middleweight division as she beat Ecuador’s Jurado Pachito 4-1 on points in the last 16.

She takes on Zemfira Magomedalieva from the Russian Olympic Committee team in Saturday’s quarter-finals.

Two other Africans are already one win away from a guaranteed medal after reaching Friday’s quarter-finals in the welterweight divisions earlier this week.

If Panguana was to win that fight she would become just the second Mozambican athlete to ever win and Olympic medal after 800m great Maria Mutoal won gold in Sydney 2000 after claiming bronze four years earlier in Atlanta.

South Africa’s women lost their third straight game at the Games going down 5-0 to Rio silver medallists the Netherlands.

The loss leaves the South Africans bottom of their six-team group behind India on goal difference with two matches left to play.

On Friday South Africa face Germany, who are unbeaten in Tokyo, and finally India a day later.

South Africa and Kenya’s men managed to finish their campaigns with wins.

Kenya were ninth of the 12 sides at the Games thanks to a 22-0 win over Ireland on Wednesday.

Africa’s only representatives in the women’s event are Kenya, who being their campaign on Thursday with games against New Zealand and the Russian Olympic Committee.