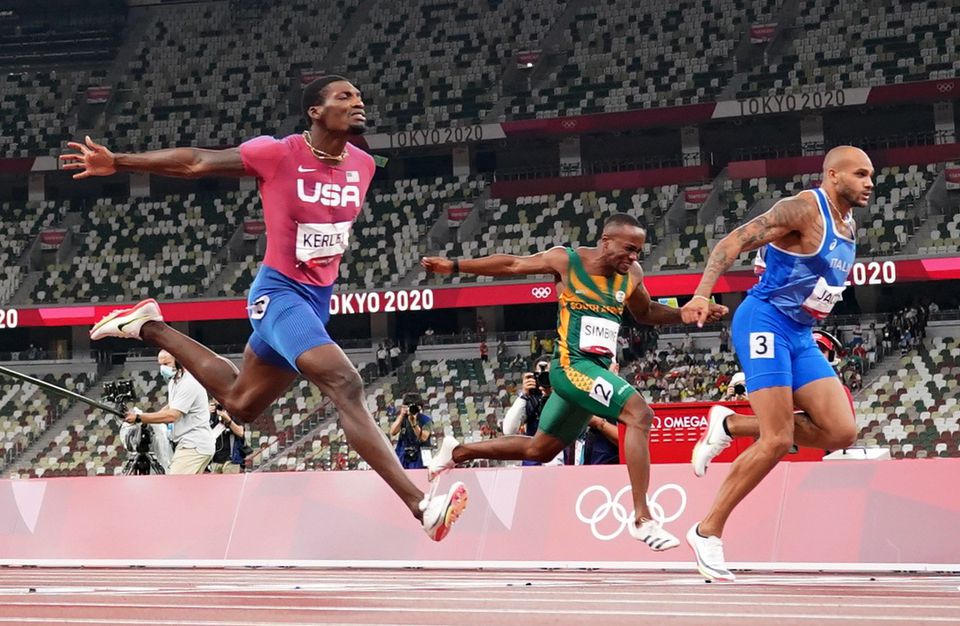 Italy’s Lamont Marcell Jacobs set a new European record as he claimed a shock victory in the men’s 100m at the Tokyo Olympics.

It capped a glorious few minutes for Italy at the Olympic Stadium with Jacobs’ victory coming shortly after Gianmarco Tamberi’s gold medal in the high jump.

The two men embraced as Jacobs — the first Italian man to win 100m gold at the Olympics and the first European man to do so since Great Britain’s Linford Christie in 1992 — surged across the finish line.

“It was my childhood dream to win an Olympic Games, and obviously, a dream can turn into something different, but to run this final and win it is a dream come true,” said 26-year-old Jacobs.

“I want to thank my family that has always supported me, my children, and my mom, who has been my number one fan since I was a child, and my team who have followed me and those who support me.”

On a hot, humid evening in Tokyo where the temperature hovered around 30 degrees Celsius (86 degrees Fahrenheit), the race got underway in nervy circumstances when GB’s Zharnel Hughes was disqualified for a false start.

It proved to be a stroke of luck for Jacobs, who had the slowest reaction time out of the blocks — more than half a second — during the first start.

Jacobs, Kerley, and De Grasse all ran personal bests in the final, with De Grasse adding another bronze medal to the one he won at the Rio Olympics five years ago.

In the first men’s 100m final since three-time champion Usain Bolt retired from athletics, Jacobs — whose winning time was 0.01 seconds faster than Bolt’s in Rio — was an unlikely successor to the Jamaican. He had been competing in the long jump until as recently as 2017 before switching his focus solely to sprinting.

“I really didn’t know anything about him. It was my first time racing him at the Monaco Diamond League (in July),” Kerley later said of Jacobs. “He did a fantastic job (here).”

Jacobs (left) and Tamberi embrace after the men’s 100m final.

Kerley had finished third at the US Olympic trials in June behind Trayvon Bromell — billed as the favorite to win the 100m title ahead of the Olympics — and Ronnie Baker. However, Bromell was unable to qualify for the final in Tokyo and Baker finished fifth behind South Africa’s Akani Simbine.

“I executed the race perfectly and I came up with a silver medal. I can’t complain,” said Kerley.

“The race was a beautiful race. I got a PB (personal best) and a silver medal. I am blessed to be at the biggest stage of my career.”

On an incident-filled evening in Tokyo, Tamberi shared the men’s high jump gold medal with Qatar’s Mutaz Essa Barshim. The two men had identical records after clearing 2.37 meters in the final, but neither was able to clear 2.39.

Shortly before that, Venezuela’s Yulimar Rojas smashed the women’s triple jump world record by 17 centimeters, sealing the gold medal with a distance of 15.67 meters.