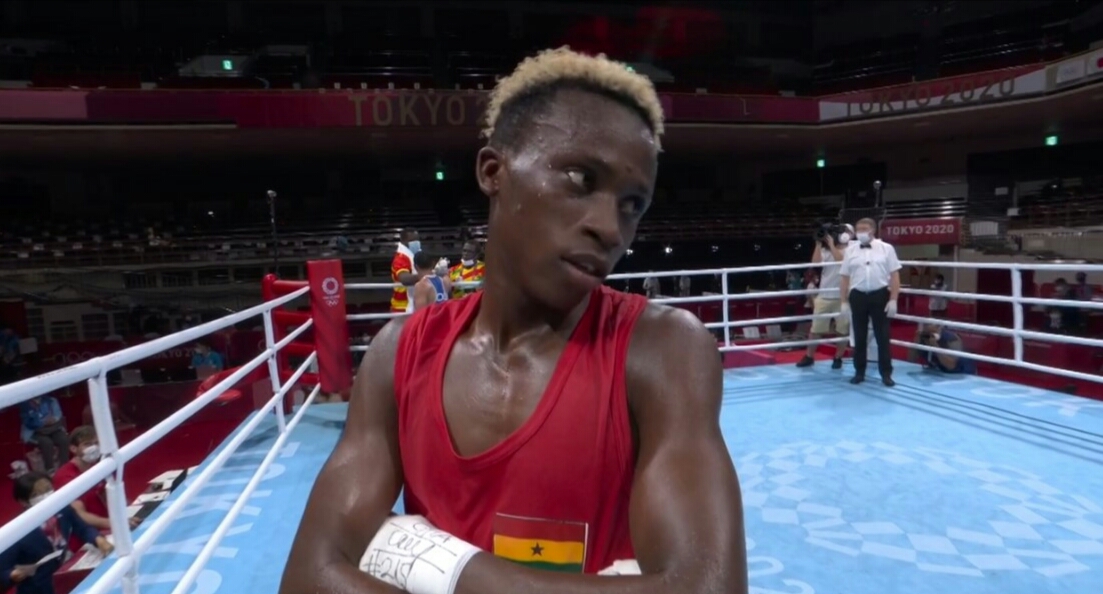 20 year old Samuel Takyi has cemented his cult status after grinding out a hard win over Ceiber David Avila of Colombia in men’s featherweight round of 8 and consequent qualification to the semi finals of the boxing tournament of the ongoing Tokyo 2020 Olympic Games in Japan.

Young Takyi lost the opening round 9-10 on the scorecards of all five ringside judges but he was not to be denied as he battled like the true ‘Ring Warrior’ he is affectionately called to edge Avila via split points, 3:2 and not only ensure Ghana ends a 29 year wait for an Olympic medal, but lands Africa a first medal in boxing at the Tokyo Olympics.

The young Ghanaian’s gusto performance makes sure he goes home with a medal no matter what happens in his next fight as there won’t be a fight for 3rd and 4th for losing semi finalists who will both get a bronze, meaning Team Ghana will return home from the Olympic Games with a medal for the first time since the Black Meteors won bronze, Africa’s first in soccer at the 1992 event in Barcelona, Spain.

It will also be a first medal in boxing since Prince Amartey won bronze in middleweight at the 1972 Olympic Games in Munich, Germany and only the 4th from a hugely rich boxing country to grab a medal at the highly prestigious global event in the fistic sport after legends Clement Quartey and Eddie Blay who won silver and bronze respectively at the 1964 Games in this same Tokyo, both at light welterweight and Amartey of course.

Now, young Takyi has put his name up there with the legends by ending Ghana’s 49-year wait for a boxing medal but he isn’t finished yet after booking a semi final date against 23 year old Duke Ragan of the USA who also won his quarter finals on a split decision, 3-2 over Great Britain’s Kurt Walker.

It was no easy night for Takyi though as he had to battle against adversity after losing the opening round unanimously on all 5 ringside judges’ scorecards, 10-9 and faced a huge battle to get back into the fight against the highly tactical Avila.

But Takyi who was heard assuring his corner led by the experienced coach Ofori Asare and his assistant, Vincent Akai Nettey, entered the second fray high on a mission to hit the Colombian as hard as he could and managed to edge it 3-2, gaining the verdict of three of the five judges and needed to win the final round convincingly to win the fight.

And deliver did the young Ghanaian did, standing tall in the face of diversionary and frustrating tactics of Avila and decisively dominated the third stanza, and deservedly got the nod of all 5 judges and in the process edge the fight via split points 3-2, three of the judges scoring it for Takyi 29-28 and the two others gave it to Avila.