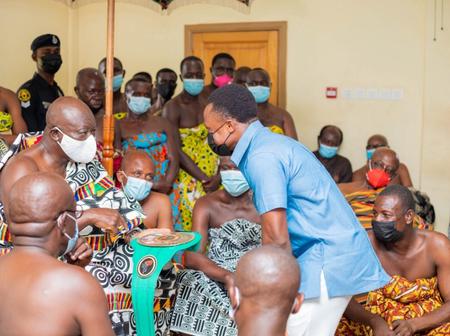 “I am always Delighted paying Homage to AsanteHene; Otumfuo Nana Osei Tutu II and sharing a few words with the people of Asanteman.”

Isaac Dogboe and his team at the Manhyia Palace in Kumasi, Ashanti Region of Ghana

The US based boxer was at the Manhyia Palace to present his recently attained North American Boxing Federation title to the King. Lots of Ghanaian boxing enthusiasts gathered in their numbers to welcome the living boxing legend at Manhyia Palace.

He disclosed to Asantehene the world title competition ahead of him and assured the Asantehene of doing whatever he could to win the title to glorify the country.

His Royal Majesty, in a counsel encouraged Dogboe to value his career so as to embrace success always.

Furthermore, Otumfuo asked for the heavenly father’s blessings and guidance for him as he awaits another competition. Wishing him a success in his career and hoping for the best for Dogboe and fights ahead of him.