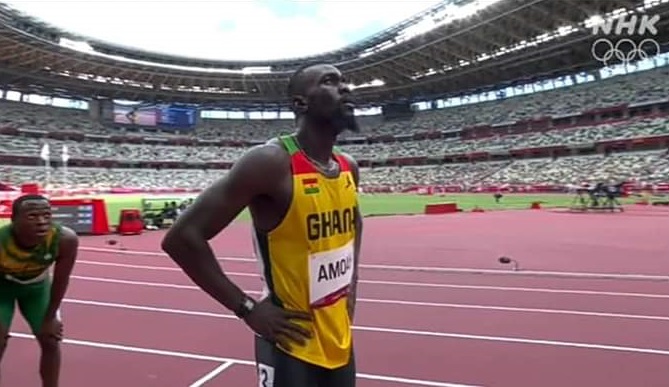 Ghana’s bid for the West African country’s 5th overall medal in the Summer Olympics was unsuccessful as the men’s 4×100 relay team anchored by Coppin State graduate Joseph Amoah was disqualified for a lane infringement in the final Friday night at Olympic Stadium in Tokyo.

Two days after Amoah and his teammates set a national record in the event, the quartet appeared to finish seventh out of eight competitors with a time of 38.40 seconds. But according to the official results, the Ghana team was disqualified by Rule TR 17.3.1, which is a lane infringement.

It appeared that during the exchange of the baton between Emmanuel Yeboah running the third leg and Amoah running the anchor segment, the trade occurred with Amoah already out of the changeover zone.

On Wednesday night, the foursome of Sean Safo-Antwi, Benjamin Azamati, Yeboah and Amoah finished fifth in their heat, but their time of 38.08 seconds was still fast enough to earn them a berth in the final for the first time since 1996.

The 24-year-old Amoah — who clocked a season-best 20.27 seconds in a semifinal of the 200-meter race on Aug. 3, which proved to be the 13th-fastest time in the event — was joined by Joseph Manu, who is poised to begin his senior year with the Eagles later this month.