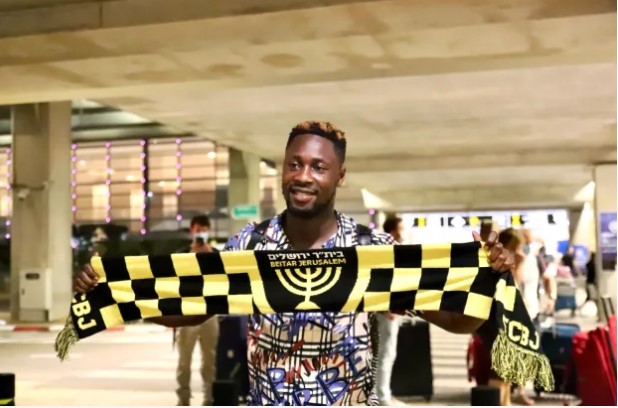 Ghanaian Richmond Boakye Yiadom has received a warm welcome in Israel where he will continue his playing career.

Yiadom landed in Israel’s capital Jerusalem to begin his career as a Beitar Jerusalem player, 20 days after the club announced his acquisition.

According to reports, the 28-year-old will be isolated for a period before meeting his new teammates and technical team.

Yiadom has agreed a one-year deal with the option for a further year.

He moves on a free transfer that guarantees a huge salary after leaving Polish top-flight side Gornik Zabreze at the end of last season following a six-month stay.

The club has the first option of signing the player for another season if he impresses in his first year with the Jerusalem outfit.

“Beitar Jerusalem is pleased to announce the signing of the offensive striker Richmond Boakye, who signed with the team for one season with an option for another season,” the club said in a statement on Tuesday night.

The striker, who has made 14 appearances for the Ghana national team, has an impressive resume, having played for top clubs in top leagues in Europe.

Boakye left the Serbian giants Red Stars Belgrade after the expiration of his contract in December last year.

He entered into the history books of the club as the third foreign player with the most goals.

Boakye popularly called ‘Bocko’ scored 60 goals in over 100 appearances for the white and red army.

He won two Serbian Premier League titles in his four-year stint with the club.