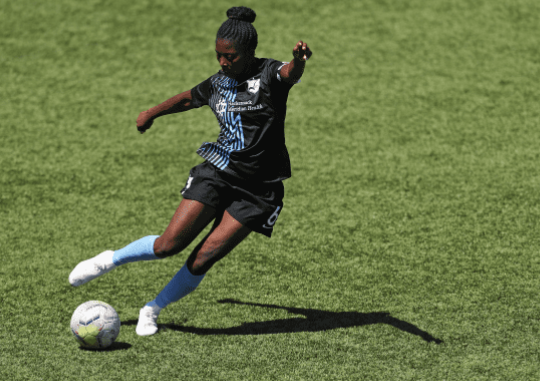 Jennifer Cudjoe came to America for an education and, in all respects, has got far more than she bargained for.

“It hasn’t just been the schooling and the football,” the talented Ghanaian told FIFA.com. “It’s life lessons. If you look at the US players, they’re the best not just because they have talent, but because their mentality and work-rate is insane. So much of it is about mindset; about how much you’re willing to put in.”

If Cudjoe has been quick to pick up that invaluable lesson, it’s perhaps because she has been learning from the ultimate example. Gotham FC team-mate Carli Lloyd stands, after all, as the embodiment of the fierce, focused dedication and drive that established USA as women’s football’s pre-eminent power.

The 39-year-old, who recently set yet more records at Tokyo 2020, has written about “conditioning mind and body to work hard every single day”, of “grinding” daily to turn weaknesses into strengths. The results and rewards yielded by this mindset speak for themselves, and they also ensure eager listeners whenever Lloyd passes on pearls of wisdom.

“Working with Carli has been incredible,” said Cudjoe. “From the first training session I had with her, there was a nervousness and excitement. You’re thinking, ‘I need to bring 100 per cent because it’s Carli Lloyd and you know she’ll never bring anything less’.

“She’s had an amazing career, been the best in the world, but it’s never enough for her and that’s why she keeps going at the very top level.

“She always tells me, ‘You have to know there’s no tomorrow. It’s all about today and giving everything you have.’ And that’s what I’ve tried to take on board more than anything: making the most of today and never holding back.”

She might be the perfect role model, but Lloyd isn’t Cudjoe’s first. Her older sister, Elizabeth, led by example in representing Ghana at FIFA youth tournaments and, later, in moving to the US to chase her football dreams. Jennifer also drew inspiration from an icon of the men’s game, and grew up idolising one of Lloyd’s US team-mates.

“Alex Morgan was a big hero of mine,” explained the Black Queens midfielder. “Her mentality of fighting for what you want, even if people don’t always believe in your skills and ability, was a big thing for me. She kept going, got to the top, and that’s what I want to do too.

“Kaka had actually been my first role model in football. My friends even gave me the nickname Kaka because of the way I played, and I found myself trying to be more and more like him. But I wanted someone to look up to in women’s football too, and I remember seeing Alex Morgan when she was young playing a game in snow, running everywhere, tackling, putting in so much work.

“It was amazing for me to see a forward play in that way. Then I saw her speak about how she’d reacted to coaches doubting her ability and I admired her even more.”

Cudjoe is now keen to provide a shining example of her own, and she is going the right way about it. After all, the story of her rise through lowly college and amateur teams to reach the National Women’s Soccer League (NWSL) is not the stuff of fairy tales, but a testament to patience and persistence.

She earned her place with Gotham FC, then known as Sky Blue, via an open tryout and, having achieved one dream, is now reaching towards another.

“I want to win the championship here and become one of the best midfielders in the world. That’s my goal,” she said. “But I also want to be an example for kids; to show them what’s possible when you work hard.”

Having shone on the world stage as a youngster, Cudjoe is also desperate to help her senior national team return to the biggest global tournaments.

Ghana’s absence from the last three FIFA Women’s World Cups has been a source of great regret, and with the likes of Cameroon, Equatorial Guinea, South Africa and Zambia having surpassed them in recent years, the Black Queens have some ground to recover.

“It’s been a tough time,” Cudjoe acknowledged. “For years, Ghana were always at these big tournaments and it’s tough to see them taking place without us.

“At some point, I believe we’ll figure things out and get back to qualifying again. But it comes down to the amount of work that the association and everyone involved wants to put in to get us back there. And although I’m encouraged by some changes over the past three years, there are still improvements needing made.”

Returning to that exalted stage was not made any easier by a qualifying draw that pitted the Black Queens against old rivals Nigeria, a team they once ruled the continent alongside. “I was surprised it was even possible to be honest,” said Cudjoe. “You don’t expect two of Africa’s top countries – and whatever has happened recently, Ghana is still one of those – to be drawn together at this stage of qualifying.”

With Nigeria sure to be strong favourites, Ghana’s mindset will be crucial. Fortunately, the Black Queens have within their ranks a player who knows what can happen when an unlikely goal is pursued with dogged determination.