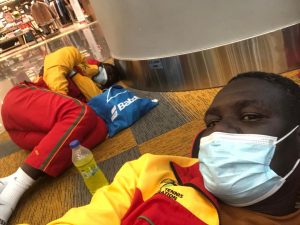 The Golden Rackets, consisting of Samuel Antwi, Benjamin Palm, Jeff Bagerbaseh failed to qualify for the 2022 World Cup playoffs after losing all three games in the Africa Group 3 of the World Cup of tennis.

According to Fred, the team was to start training three months prior to the tournament but was forced to do so just three weeks before the start of the competition.

Fred Egyri says that their training was delayed because the Ghana Tennis Federation (GTF) said it could not offer financial aid.

In an interview with UniversSports, he said that the team could not match their opponents because of insufficient training.

“I gave the GTF a letter and I told them we needed to start training 3 months before the competition starts but they were complaining that there is no money, and so if we start training early, we were going to spend a lot of money,”  he explained.

“I insisted that we only need this training for the guys to prepare well and go. The intensity here is different from the intensity there. The guys there are always playing tournaments and we are here playing ourselves,” Fred Egyiri lamented.

Narrating their journey to Egypt, Mr. Egyiri disclosed that they were forced to forfeit their first game against Mozambique after arriving late in the North African country, barely hours to the start of the game.

“Our visas were not ready. The day we had the visa was Tuesday at 4 pm and we needed to travel that same day. The next day we were playing a match against Mozambique,” he further told Radio Universe Sports.

“So we traveled on Tuesday evening, we got to Turkey and they said our flight was cancelled. We had to sleep at the airport for nine hours before we could fly again to Egypt,” the Golden Rackets captain narrated.

“All my players were lying on the floor because they said we don’t have visas so we can’t go into the country. So my guys were just sleeping on the floor, relaxing, walking around. We managed there and we traveled back to Egypt in the evening and the next day, we were playing against Mozambique,” he continued.

“My guys were really tired. The preparation, everything from here all the way to that place didn’t help us. We were going for a Davis Cup tournament and you miss your first match, walk over your second match this happened. No I mean this is serious,” Fred Egyiri said.

He also mentioned that the team could not satisfy the requirement of submitting four players for the tournament – a situation he blames the Ghana Tennis Federation for as it failed to secure visa for some team members.