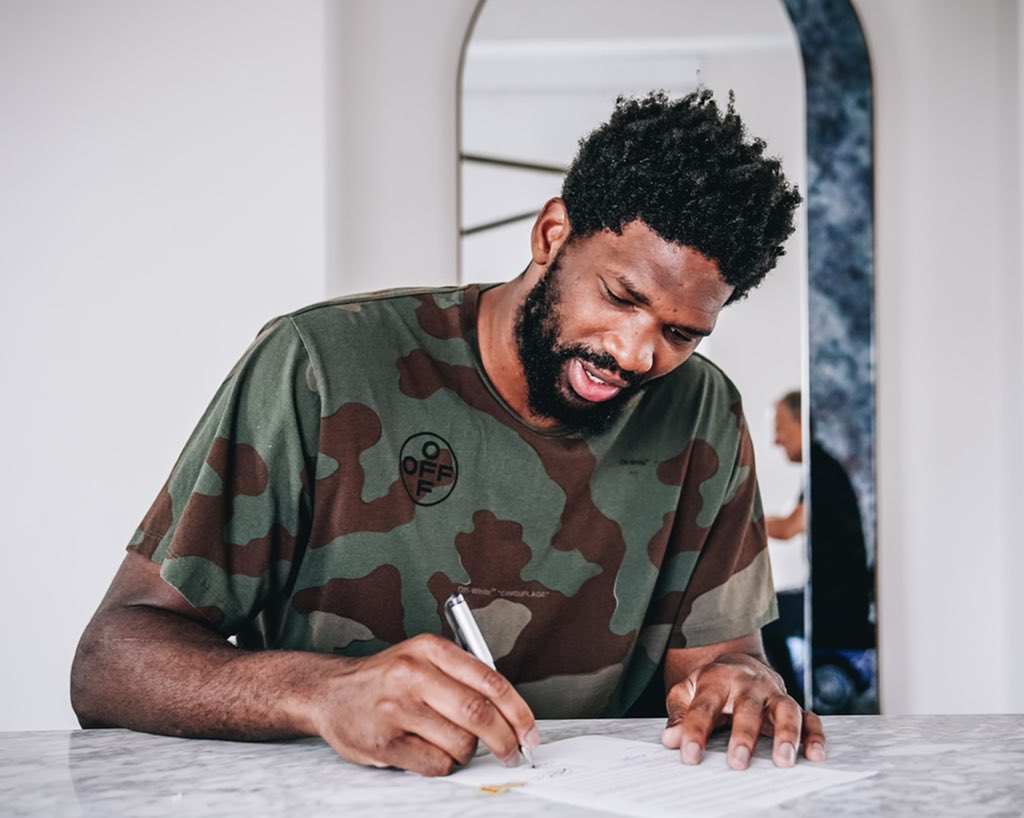 All-Star center Joel Embiid is staying with the Philadelphia 76ers after signing a contract extension, the team announced Tuesday.

Per Shams Charania of The Athletic and Ramona Shelburne of ESPN, Embiid has agreed to a four-year, $196 million supermax deal that will keep him with the 76ers through the 2026-27 season.

Per reports, the deal guarantees Embiid a total of $261 million because he was already set to make $65 million in the final two seasons under the terms of his current deal.

Shortly after the deal was made official, Embiid tweeted: “There’s no place like Philadelphia!!! Excited to continue working towards bringing a title home and eventually retire here.”

He was signed through the 2022-23 season but was eligible for a “super max” deal that could pay him $191 million from 2023-27. Per Shelburne, the new supermax deal does not contain the same provisions Embiid’s 2017 contract did that protected the 76ers in the case of catastrophic injury to Embiid’s lower back or feet.

The 27-year-old Embiid was NBA MVP runner-up this season to Denver’s Nikola Jokic, making him eligible for the supermax contract extension. Embiid led the Sixers to the best regular-season record in the Eastern Conference. Under coach Doc Rivers, the Sixers lost in the second round to the Atlanta Hawks.

The Sixers tweeted a photo of Embiid and team owner Josh Harris with the contract that said, “@joelembiid isn’t going anywhere.”

“Joel is the definition of elite — a role model in our community and a true MVP-caliber superstar on the court,” Harris said. “Since he was drafted in 2014, his rare blend of skills, charisma and leadership has transformed this franchise. We couldn’t be more grateful and excited to continue watching him in a 76ers uniform.”

He tore cartilage in his right knee during the playoffs but played through the injury and was unstoppable at times in the post. He scored 36 points in 28 minutes in a Game 3 first-round win over Washington. He followed that up with 39 points in Game 1 and 40 in Game 2 in the East semis. Embiid was 11 of 21 and scored 31 points in Philadelphia’s Game 7 home loss to the Hawks.

Embiid was an All-NBA Second Team selection, marking the third All-NBA honor of his career (he was All-NBA Second Team in both 2017-18 and 2018-19) and joining Allen Iverson, Charles Barkley, Julius Erving, Moses Malone, Billy Cunningham, Wilt Chamberlain, Hal Greer and Dolph Schayes as the only Philadelphia players to ever make at least three All-NBA teams.

Since being selected No. 3 overall by the 76ers in the 2014 Draft, Embiid has been nothing short of extremely reliable after some early injury woes. A native of Cameroon, Embiid sat out his first two seasons with injuries and has never played more than 64 games in a season over his career. He missed games this year with a bone bruise on his left knee.

The 76ers have hardly stood pat in what has been team president Daryl Morey’s first crack at restructuring the roster to his liking. He let free-agent backup center Dwight Howard leave (to sign with the Los Angeles Lakers) and backup guard George Hill do likewise (he signed with the Milwaukee Bucks).

Among his charitable endeavors, Embiid donated his $100,000 All-Star Game winnings to area homeless shelters, partnered with a grocery chain in December to help five families with rent or mortgage relief, and pledged with Sixers ownership a combined $1.3 million to Penn Medicine for COVID-19 antibody testing of front-line health care workers.

Embiid, forward Tobias Harris and All-Star guard Ben Simmons, however, are the players who will shape Philadelphia’s success — as they have since becoming teammates in 2018-19.

The 76ers left the draft — and perhaps well beyond — with the maligned Simmons still on the roster. Simmons, the No. 1 pick of the 2016 draft, has floated in trade proposals ever since the Sixers were eliminated by the Atlanta Hawks in the second round of the Eastern Conference playoffs. The three-time All-Star is headed into the second year of a $177 million max deal, but his failures from the free-throw and 3-point lines have made him expendable.

Simmons seemed nonplussed by the trade speculation, posting videos on Instagram of him relaxing in a pool. The Sixers are in no rush to trade Simmons and could wait until the trade deadline — or just keep him — and see if can he can bolster his value by showing some improvement with his jumper and from the line.

Information from The Associated Press was used in this report.