Tokyo 2020: Gold was our target but we are happy with the bronze - Chef de Mission Aggrey 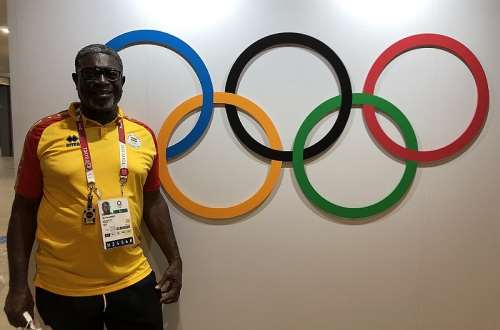 Chef de Mission of Team Ghana at the Tokyo Olympic Games, Mr. Michael Aggrey has disclosed that their dream target was to win gold, but they are happy and content with the bronze medal, and for the Ghanaian star, Samuel Takyi to represent Africa on the closing day ceremony podium, standing by the IOC President is a great honour and achievement.

Speaking to this portal, Mr. Aggrey who is also the President of the Ghana Golf Association said Team Ghana chosed the theme ‘Ghana Champions For Gold” and had it not been the disappointing decision in the Semi Final bout between Samuel Takyi and American Duke Ragan, Ghana’s position on the medals table could be better.

According to him, the entire Team proved to be disciplines from the camping at Inawashiro to Tokyo, and after watching the athletes preparations and training, he knew that Team Ghana was not going home empty-handed.

He praised the coaches who handled the athletes, and the medical staff as well as the ubiquitous media attaché.

“We were like a family. People should not think we didn’t had problems. There were issues, and we had to manage everything tactfully and diplomatically with respect” he said.