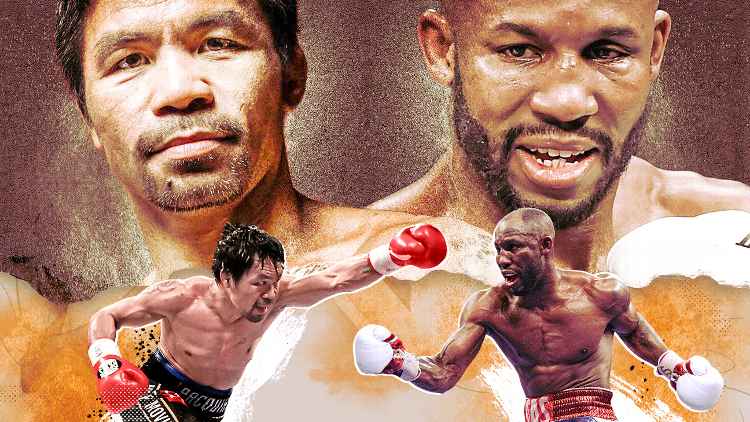 The boxing schedule in 2021 is simply never set in stone. Manny Pacquiao was scheduled to face Errol Spence Jr. on Saturday in one of boxing’s most anticipated fights of the year, but Spence suffered an eye injury and was replaced by WBA “super” welterweight champion Yordenis Ugas (Saturday, 9 p.m. ET on PPV).

Ugas (26-4, 12 KOs), 35, of Cuba, is a very good counterpuncher with a great uppercut to the body, which he throws with both hands. However, he lacks the ability to corner his opponents, something he would need to do to have his best chance against Pacquiao.

Pacquiao (62-7-2, 39 KOs), 42, of the Philippines, is boxing’s only eight-division champion. He’s attempting to win a record-setting fifth welterweight title in his career. Since losing to Floyd Mayweather in 2015, he’s 5-1, with the only blemish being a controversial decision loss to Jeff Horn in Australia in 2017.

Pacquiao looked like vintage Manny when he defeated Keith Thurman in his most recent fight in July 2019. He dropped Thurman in Round 1 en route to a split-decision victory that was wider than the judges’ scorecards reflected.

Ugas has won three consecutive fights since losing a close decision to Shawn Porter in 2019, a fight many thought he won. Last September he defeated Abel Ramos to win a secondary welterweight title.

Can Ugas box his way to a victory over one of the best fighters of his generation? Can Pacquiao beat Father Time once again and continue building on his legacy?

We asked boxing analysts and former opponents for their take on the fight and their predictions.

Editor’s note: Responses have been edited for brevity and clarity.

How Pacquiao wins: I believe that Pacquiao — his fighting style — is not going to change. That style of fighting has given him good results. Obviously, he must have studied his opponent, but Pacquiao must do what he has always done, be the same Pacquiao. He needs to be very active, move, throw punches in bunches from different angles and different speeds, go in and out. Many talk about his age, but he is still as good as he always has been. He has a lot of speed, and his punches are very powerful. When I fought him at junior middleweight, he was the one who has hit me the hardest in my career. Pacquiao has a very good punch. He hit me with a good uppercut just when I was getting inside, and when he connected, it was like two trucks colliding head on. Pacquiao is very good with timing. Pacquiao is very accurate, fast and very strong. I think he will overwhelm Ugas.

How Ugas wins: I always thought Pacquiao could hit me with seven punches, but if I landed one of mine, I was going to knock him out. I didn’t think he was going to be able to take my punches. And man, I was wrong. To beat Pacquiao you have to close the exit, don’t let him escape when you have him in a corner, cut the ring off and put him there. I couldn’t do it. In fact, I hit him with a hook but not much else. I couldn’t reach him. Ugas must try to corner him and try to connect his punches when there. I think it’s the only thing Ugas can do to win, but it will be very difficult for Ugas to do that since Pacquiao is too fast. I was very good at cornering opponents and I couldn’t do it against Pacquiao. Ugas is not that kind of fighter.

X factor: Pacquiao’s uppercut swelled my eye and hurt me, but that’s not the only punch Pacquiao throws with power, and that power is going to be the key. Either the uppercut, the overhead left, the straight, the right hand — Pacquiao doesn’t stop throwing punches, and it’s the accumulation of punches that hurts you. Manny is not going to stand in front of Ugas; he is going to move, throwing punches continuously, and thus he is going to win the fight.

Prediction: Pacquiao wins by KO, either by accumulation of punches or with a knockout blow, possibly after the seventh round.

How Pacquiao wins: Pacquiao must use his speed, be accurate and use his lateral steps. He does that very well, so he doesn’t need to make many adjustments against Ugas. In his last few fights, I have seen him use more side steps, and that will serve him well against Ugas. He is also a good counterpuncher and throws straight punches with a lot of speed and a lot of power. I think fighting a taller fighter in Ugas, those straight hands are going to favor Pacquiao. And like I said, Pacquiao knows how to counterattack. He moves his waist more now and knows how to get inside and get out quickly. That strategy is going to be very important in this fight — throw straight punches, move in and out using his speed.

Do you remember how Pacquiao sent Keith Thurman to the canvas in the first round of their fight? He shoots three straight right hands, one left to the body and hits him with another straight right on the chin to send him to the mat. Those same punches are going to be key in this fight.

How Ugas wins: Ugas also has to use his speed. He has to cancel out Pacquiao’s speed. What I did in my four fights with Pacquiao was to fight him at the same speed that he was fighting me — I fought him at his pace. And that should be Ugas’ strategy to have a chance to connect his punches, because Pacquiao is a fighter who defends himself very well, so speed is key. And like Pacquiao, use the side movements, throw punches from the angles and counterattack. Pacquiao covers himself well and uses his high guard to defend himself. To open that guard, Ugas must throw his hooks and curved punches in combination with the straight hand. And he has to finish his combinations with hooks over the top.

X factor: Ugas’ movements. He must do what he does best, move his waist, counterpunch and keep Manny away — something that he can accomplish if he uses his height and reach advantages. Ugas’ speed is key. If he fights Pacquiao at his own pace, he can take advantage. For Pacquiao, the straight punches will be the key, the punches that characterize him and that he throws with great speed and a lot of power.

Prediction: It’s going to be a very good, strategic fight that could complicate Pacquiao a bit in the early rounds, but with his speed, experience and punching power, I can see Pacquiao sending Ugas to the canvas and possibly win by KO. But I think Ugas is a very strong fighter, and he comes very motivated. This is a great opportunity for him to show that he belongs among the best fighters in the division. And that motivation will serve him well in the later rounds. It’s going to be a close fight, but Pacquiao should win by decision. Ugas can take punches very well, but we haven’t seen him with fighters on the level of Pacquiao. I’m going with Pacquiao by decision.

How Pacquiao wins: He has to be Manny Pacquiao. Use his angles, his movements, the activity, throw a lot of punches — that’s the way he gets it done. When I fought Ugas, I thought I could’ve done more fighting inside. He’s a counterpuncher, likes to fight on the outside, and I think short punches and fighting inside will work well against Ugas.

How Ugas wins: Counterpunching. That’s one of Pacquiao’s weaknesses. Juan Manuel Marquez caught him with a nice counterpunch to knock him out, and Ugas is a great counterpuncher and has a great chance to catch him coming in. But you have to put pressure on Manny as well, and Ugas doesn’t do that. He’s not that kind of fighter, so counterpunching gives him a better chance. Ugas has a nice uppercut to the body that can work against Manny, especially because Pacquiao is a southpaw. The right uppercut to the body would be a good punch for Ugas.

X factor: Experience. I give the edge to Pacquiao because of his experience. His work rate is awesome. There’s nobody like him with that kind of activity he has in the ring, and that’s going to be the key.

Prediction: Pacquiao winning a decision, maybe a unanimous decision. I think Pacquiao is going to outwork Ugas throughout the fight and win rounds. Even at 42 he moves well, has speed and power. In his last fight against Keith Thurman he showed he’s still the same Manny Pacquiao. I don’t think that has changed.

How Ugas wins: Counterpunch and box early. He’s not going to win if he goes toe-to-toe with Pacquiao. If Ugas sees in the first two or three rounds that Pacquiao can’t pull the trigger — same as when Oscar De La Hoya fought Pacquiao, you could see in the first two rounds that Oscar was shot, he didn’t have it anymore — if Ugas sees that from Pacquiao or senses it, he needs to attack Pacquiao. As a fighter you are able to tell if his speed, footwork and power are there, and if Ugas sees that Pacquiao is not the same, he should attack. But if not, Ugas should box, counterpunch and win rounds. Ugas is not going to beat the Pacquiao that showed up against Thurman by attacking him; he’s going to fall into Pacquiao’s style.

Prediction: I’m gonna say this again. If Father Time doesn’t catch up to Manny Pacquiao, there’s no reason to think Manny won’t win this fight. I don’t think it is going to be a KO. I think Pacquiao wins a decision, an easy decision.

We all wanted Pacquiao to face Spence, but Ugas should still make for a compelling fight. Even at age 42, Pacquiao has enough in the tank to outlast the tactician. Ugas is certainly a live underdog, but I don’t trust the judges in what should be a close contest. Ugas would have to dominate, and he lacks the necessary punching power. Over 10.5 rounds is the safest play, but I don’t want to lay -240, so I’ll opt for the Pacman via decision at plus-money.