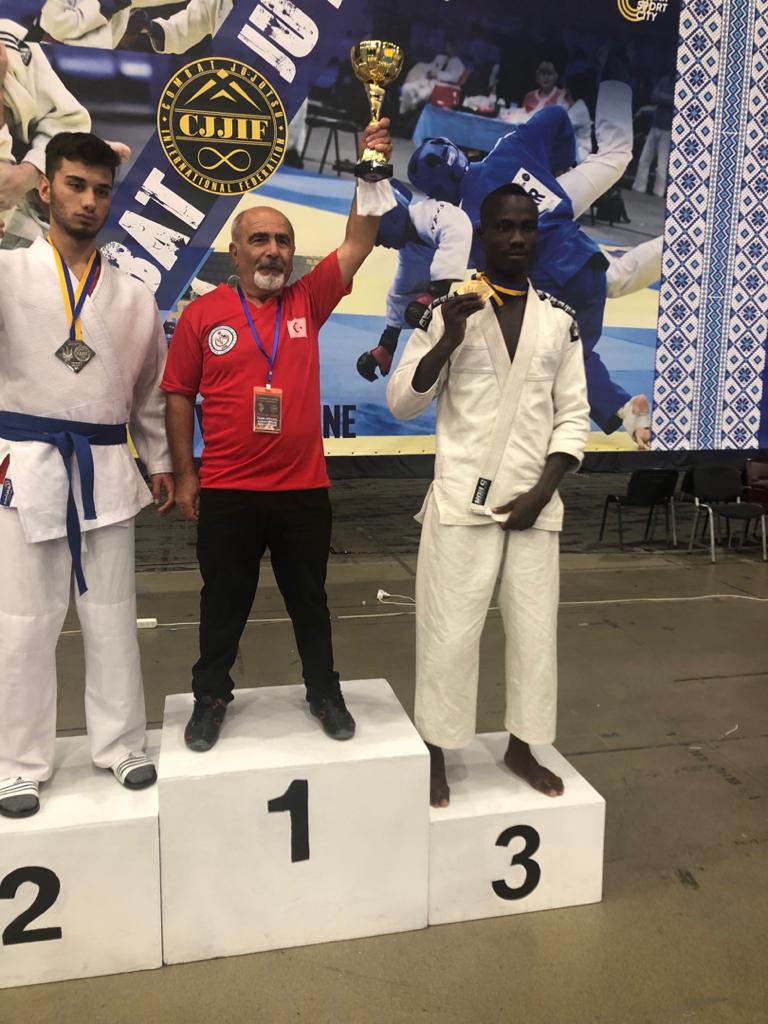 Ishmael Lantei Lamptey on the podium to receive his bronze medal won in welterweight division of the 2021 Combat Ju Jutsu world championship in Kiev, Ukraine

It was a huge success for Team Ghana at their first ever participation in the Combat Ju Jutsu world championship in Kiev, Ukraine over the weekend, after all three representatives won medals in their respective weight categories to really et tongues wagging in their direction.

the fourth qualified Ghanaian, Solomon Donne Ametepey, a middleweight unfortunately got injured in training and failed to make the trip, perhaps Ghana could have been counting four medals now.

Ghana, one of only three African countries, along with Uganda and Egypt to take part, wowed the tournament with their impressive displays even though they only arrived in Ukraine on Friday, a day into competition and had to go straight to the Urban Sports City Arsenal Sports Complex for weigh-in ahead of their respective fights on Saturday.

But that did not distract their focus on the task at hand, which was to do well and win medals, and deliver they did, all three impressing and in the process, further enhance the name of Ghana following the heroics of Tokyo 2020 Olympic Games hero, Samuel Takyi.

“The feeling is very great, the other federations of other countries like France, Turkey, UAE, Kazakhstan, Cyprus and Germany are so impressed with our team’s performance and want to invite us to participate in their various upcoming events,” said Evans Bernie-Johnson, Executive Director, Professional Combat Sports Association of Ghana (PROCSAG).

“The future of Combat Ju Jutsu in Ghana is very bright, one of the other European countries’ Combat Ju Jutsu President wanted to partner us to organise Africa and world championship as well in Ghana,” Mr. Bernie-Johnson revealed.

“Another beautiful thing is the road cross sign which our brother Samuel Takyi did at the Olympics, as soon as we appear at the arena that’s the sign they’ve been doing to welcome us, those supporting us will be chanting Ghana, Ghana, Ghana. It was so lovely,” the PROCSAG chief added.

The 3-day competition featured 32 countries and witnessed competition in adults 18+, juniors 16-17 years and cadets 12-15 years divisions. Ghana however was only represented in the adults category mainly because of financial challenges due to a blatant lack of support from government and corporate Ghana.

With the impressive performance exhibited in Ukraine by the three fighters, it is the hope of PROCSAG that Ghanaians realise the huge potential of Combat Sports and will offer the much needed support.

“We have learnt more tactics, techniques and exposure. We need government support to be able to organise and develop the sports and be in all the regions in Ghana to represent mother Ghana in upcoming international competition,” said Mr. Bernie Johnson.

“We have fighters in all categories , both male and female, but the cost of airfare, hotel, food and participation is very expensive, so if we get support from government, individuals and corporate bodies, there is no doubt we will reach very far because we can go with more athletes in all categories and win more medals for Ghana,” he continued.

Meanwhile, Team Ghana are expected back in the country on Friday.