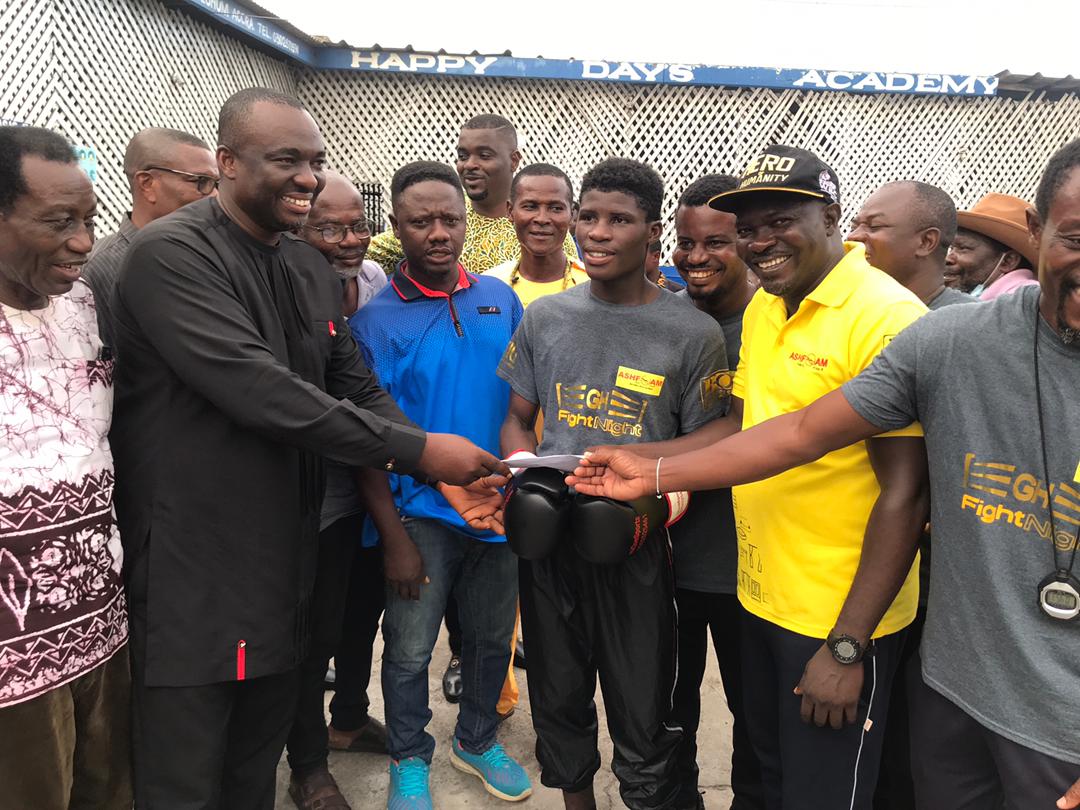 President of Ghana Boxing Authority (GBA), Abraham Kotei Neequaye and members of the executive board on Tuesday visited the training grounds of West Africa featherweight champion, Alfred ‘Bukom Bomber’ Lamptey in order to motivate him as he prepares for WBC youth silver and WBO youth titles fight against Iddi Kayumba of Tanzania at the Bukom Boxing Arena in Accra next week Saturday, 4 September.

Mr. Neequaye who is barely one month into office following victory at the GBA elective Congress back on July 22, said he is very confident Lamptey will win the first world title of any kind under his leadership and is urging the 19 year old boxer to go all out and secure victory for the country.

Mr. Neequaye and his team also donated one thousand Ghana Cedis (Gh¢1,000) to Team Lamptey to help in their little way towards taking care of the expected bills to be incurred whilst preparing for
what is surely the biggest fight of his young career.

“We thank God for giving us this day, we are very happy to be here to show our support for our boy. We all want him to win but we know that day he will be the only one in the ring, that’s why we are here to tell him that we are fully behind him so he should go in fearlessly to secure victory,” the GBA boss said at the Black Panthers Gym in the heart of Bukom in Accra.

“I’m very sure he’s going to win this title to give me a first world title one month into office. We are here to win lots of titles for Ghana and John Laryea won the WBO Africa belt just one week into my term and now it’s Alfred’s turn to add the world title and I have no doubt he will do it,” Mr. Neequaye added with poise.

Receiving the cash gift, trainer of Lamptey, Ebenezer Adjei AKA Coach Killa, thanked the Ghanaian boxing chiefs for turning up to show their support in such a kind way and promised that his ward will win the titles come fight night.

“This is quite unique for the GBA President and board to come all the way to our gym to watch us train, that’s so fantastic and we appreciate it very much. We are more motivated than ever to win these titles and I assure you the boy is ready today and will be ready on fight day,” Coach Adjei said after taking his boxer through some routine sparring session to spice up the afternoon.

Young Lamptey who has won all eight career fights thus far with 6 KOs to match, minced no words as he simply said he promises the titles will stay in Ghana.

“I thank the president for his support and I assure you that I will win the titles. The titles will remain here in Ghana, I am winning them for everyone,” Lamptey concluded his short speech.

Also on hand to offer his support and expert advice was renowned boxing trainer, Lawrence Carl Lokko in his position as GBA Technical Director and Board member.

“It’s nice to be here at the Black Panthers Gym, I have returned home because everybody knows this is where I started. It’s only good that when one of our boxers fight we all come together to give our support and help in whatever way we can so we win,” Carl Lokko said.

“I trust Coach Killa and his team as well as the boxer to prepare very well, study the opponent and not underrate him but go all out and win as quickly as possible. We all want him to win and we believe he will win,” the experienced coach added.