On This Date in Boxing history, August 31, 1969: the great Rocky Marciano Dies 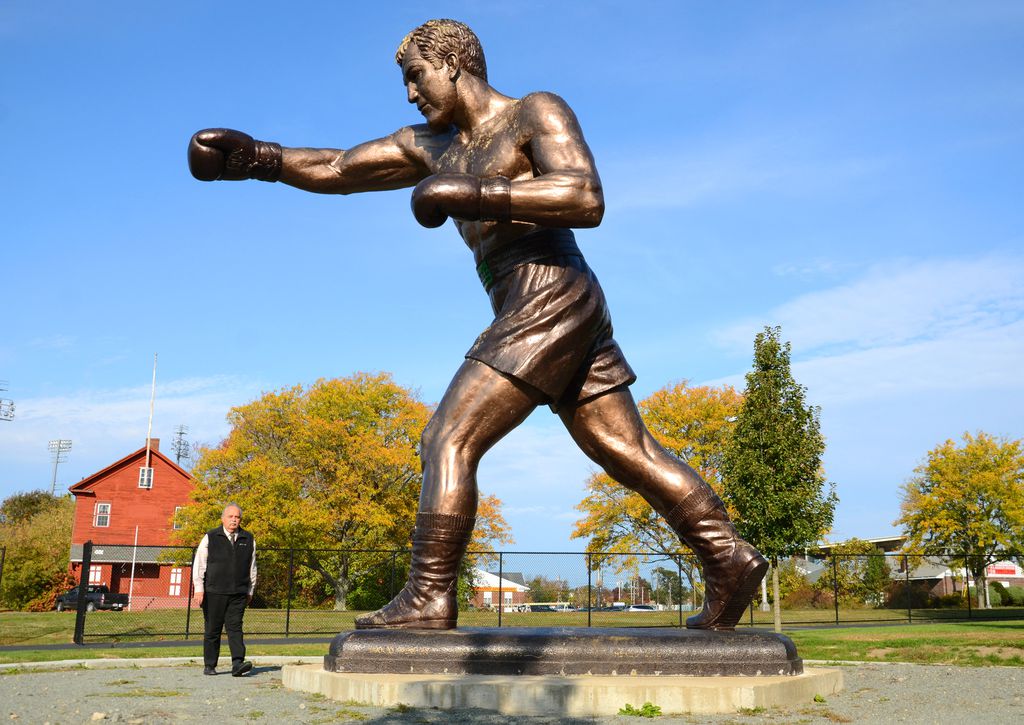 Rocky Marciano was on born September 1, 1923, in Brocton, Massachusetts as the son of Italian Immigrants. Growing up, Marciano, who was known affectionately as “the Brocton Brawler” used a variety of unconventional tools to workout; this included homemade weightlifting equipment and a stuffed mailbag that was used as a heavy bag. Before his boxing career, Rocky Marciano was a blue-collar man who worked several jobs, including a ditch digger and a shoemaker. In World War II, he served in the Army ferrying supplies across the English Channel into France after D-Day.

After the war, Rocky Marciano began boxing as an amateur while awaiting discharge from the Army in Fort Lewis, Washington. He would try out for the US Olympic Boxing team but was forced to withdraw from the trials with a broken hand. This setback enabled Marciano to begin his professional career, as he won each of his first 16 fights by knockout. Marciano’s most difficult fight came in 1950 when he beat Roland La Starza in a split decision at Madison Square Garden on March 24th. On October 26, 1951, Rocky Marciano scored an eighth-round TKO of Joe Louis at the Garden, in what would be the Brown Bomber’s last match.

Rocky Marciano finally got a chance at the heavyweight title on September 23, 1952, after winning his first 42 fights. He would knock out Jersey Joe Walcott in the 13th round at Philadelphia Municipal Stadium. Eight months later in the rematch at Chicago Stadium, the Brocton Brawler only needed one round. Next up was a rematch with Roland La Starza, the man who came closest to beating Marciano. This time Rocky would win in an 11th round knockout at the Polo Grounds. Marciano’s toughest title defense came on June 17, 1954, when he beat Ezzard Charles in a controversial unanimous decision at Yankee Stadium. Three months later, Marciano knocked out Charles in the eighth round.

Rocky Marciano’s final fight would come on September 21, 1955, when he scored a ninth-round knockout of Archie Moore at Yankee Stadium. At 49-0 he was the only heavyweight champion to retire with an unbeaten record. He briefly considered a comeback in 1959 but decided to stay retired after a month of training for a possible fight against champion Ingemar Johansson.

After retiring, Rocky Marciano dabbled into acting and worked as a boxing commentator. In 1969, he would step in the ring one last time for a sparring session with Muhammad Ali, who was still serving a suspension from boxing for his refusal to answer the draft. The sparring session was part of a match between the two champions that would be determined by a computer. Each fighter took turns winning as neither knew the result of the fight. The fight would be weaved together into a film that was released in 1970 detailing the results of what the computer determined. In the end, it was Marciano winning again with a 13th round knockout.

On August 31, 1969, Rocky Marciano and a childhood friend were flying from Chicago to Des Moines in a tiny Cessna 172. The pilot was inexperienced in flying in stormy weather or at night. With conditions at Des Moines difficult, the pilot tried to shift to another close-by airport when he was landing his misjudged the runway and hit a tree, killing all three onboard.