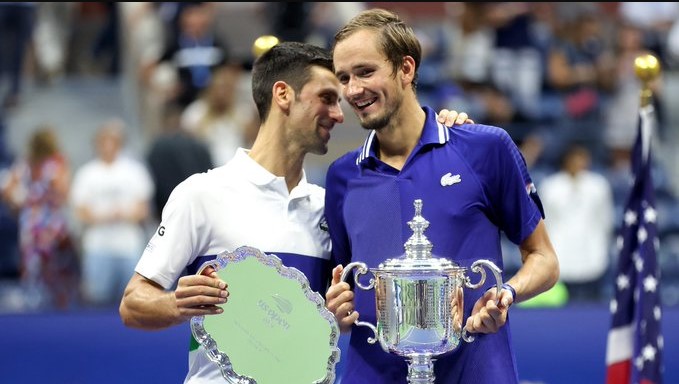 Novak Djokovic’s hopes of a calendar Grand Slam and 21st major were ended after Daniil Medvedev put in a stunning performance to defeat the world No 1 in the US Open final.

Djokovic was dreaming of becoming only the third man after Don Budge (1938) and Rod Laver (1962 and 1969) to sweep all four majors in the same year.

To add to the weight of history on his shoulders, victory would also have seen him move clear of his great rivals Roger Federer and Rafael Nadal and become the first man ever to win a 21st Slam singles title.

But Medvedev put an end to his chances with a phenomenal performance to make it third time lucky in a Grand Slam final, winning 6-4 6-4 6-4 to at least strike a real blow for the younger generation against the old guard.

Medvedev said: “First of all I want to say sorry for you fans and Novak because we all know what he was going for today and I just want to say what you have accomplished this year and throughout your career – I never said this to anybody but I’ll say it right now, for me you are the greatest tennis player in history.

“I want to thank my team. It’s not an easy journey to win a Slam but I’m really thankful to you for helping me throughout the journey.”

Addressing the crowd, the Russian added: “Then I want to thank you guys. Today you were maybe a little bit more for Novak but that’s completely understandable. Throughout the week you gave me a lot of energy. It helped me through today. It was not easy but thanks a lot.

“Last but not least, I want to finish my speech on a very sweet note. It’s the third anniversary for me and my wife today and during the tournament I couldn’t think of a present or anything. When I won, the only thing I thought was if I lose I have no time to find a present so I have to win this match. I love you Dasha.”

Medvedev was well beaten by Djokovic in the Australian Open final in February but he showed in the the opening set that he was not going to make the same mistakes, putting on a clinic and giving up just three points on serve.

Djokovic dropped his opening service game from 40-15 and was unable to touch Medvedev thereafter. The Russian never relinquished his lead to become the fifth player in a row at the US Open to take the first set off Djokovic.

Things were not going according to plan for the Serb whose serve and volley tactics were not troubling Medvedev in a battle of the top two seeds.

Medvedev was playing in his third Grand Slam final and second this year, having lost to the 34-year-old Djokovic at the Australian Open. He came into the match having dropped just one set having putting on an exhibition of brutal tennis along the way.

The rhythm was just not in Djokovic’s legs and he looked to be physically compromised, whether it was tension, fatigue or a combination of both.

It wasn’t long before his frustration boiled over in the fourth game of the second set. After failing to convert a couple of break points, he destroyed his racket repeatedly on the court, earning a warning.

Medvedev seized the moment with a break for 3-2 and served out the set to move to within one of a maiden Grand Slam title.

His aggressive game appeared to be proving far too much for Djokovic to cope with and he broke through the top seed’s resistance once again, this time in the opening game of the third set.

Djokovic looked bedraggled by the time Medvedev sealed a second break of his serve to surge into a 3-0 lead. The Russian served for the title but he crumbled at the finishing line to hand the world No 1 one break back.

An emotional Djokovic covered his face with his towel and sobbed before coming out in the 10th game to the support of a wild crowd and Hollywood royalty in attendance on Arthur Ashe Stadium.

Medvedev double-faulted again on his second match point but on the third Djokovic netted and Medvedev fell to the court in celebration becoming the first man since Rafael Nadal in 2010 and second since Ivan Lendl in 1987 to drop only one set en route to the title in New York.

Through tears, Djokovic, whose insatiable desire for victory has always been matched by a hugely commendable graciousness in defeat, said: “I would like to start off by saying congratulations to Daniil, amazing match, amazing tournament.

“If there is anyone that deserves a grand slam title right now, it’s you so well done.”

Addressing the crowd, he added: “I was thinking of both scenarios, kind of visualising myself standing here in front of you guys and what would I say.

“I would like to say that tonight, even though I have not won the match my heart is filled with joy and I’m the happiest man alive because you guys made me feel very special on the court.”