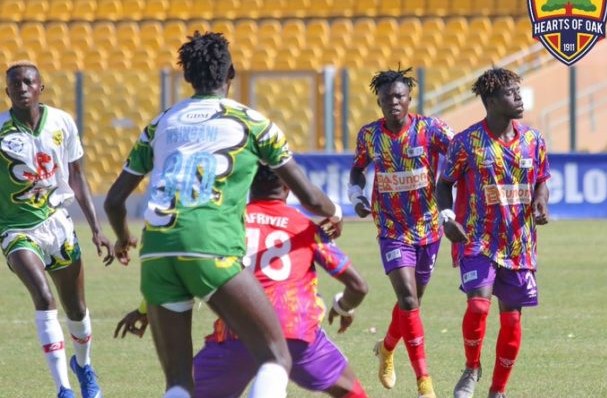 Two late goals secured Hearts of Oak a 2-0 home win over Guinean side Club Industriel de Kamsar in the preliminary round of the CAF Champions League round on Sunday.

When things got tough, substitutes Kofi Kordzi and Salim Adams showed up to spur the Ghanaian champions to victory in the fixture at the Accra Sports Stadium.

A one-off showdown owing to a political instability-induced cancellation of the first leg away fixture in Guinea, Sunday’s match has seen Hearts qualify for the first round of the competition where they face a tough encounter with Wydad Casablanca of Morocco.

Kamsar, meanwhile, had former Ghana and Asante Kotoko defender Amos Frimpong in their starting set-up, with another Ghanaian, Martin Antwi, also formerly of Kotoko, on the bench.

The visitors did well to hold the Phobians to a goalless draw in the first 45 minutes and appeared on course to do the same in the second stanza before things took a late dramatic turn.

After several unsuccessful attempts, Hearts broke the deadlock seven minutes to full-time when Kordzi, who was making a return to the club after a spell away in Qatar last season, curled a beautiful free-kick from outside the box into the net.

It was a huge sense of relief for the Phobians, who were beginning to show signs of frustration as the game headed towards full-time.

Boadu’s outfit were not done just yet as they added one more goal in stoppage time, this time by a thunderous Adams strike from outside the box.

The goal effectively dashed every hope of Kamsar for a late comeback as Ivorian referee Patrick Tanguy Jean Philippe Vle shortly whistled to bring an end to proceedings.

Hearts are set to face Moroccan champions Wydad Casablanca in the first round next month for a place in the group stage.