Canelo Alvarez: ‘Caleb Plant Has Already Lost In His Mind’ 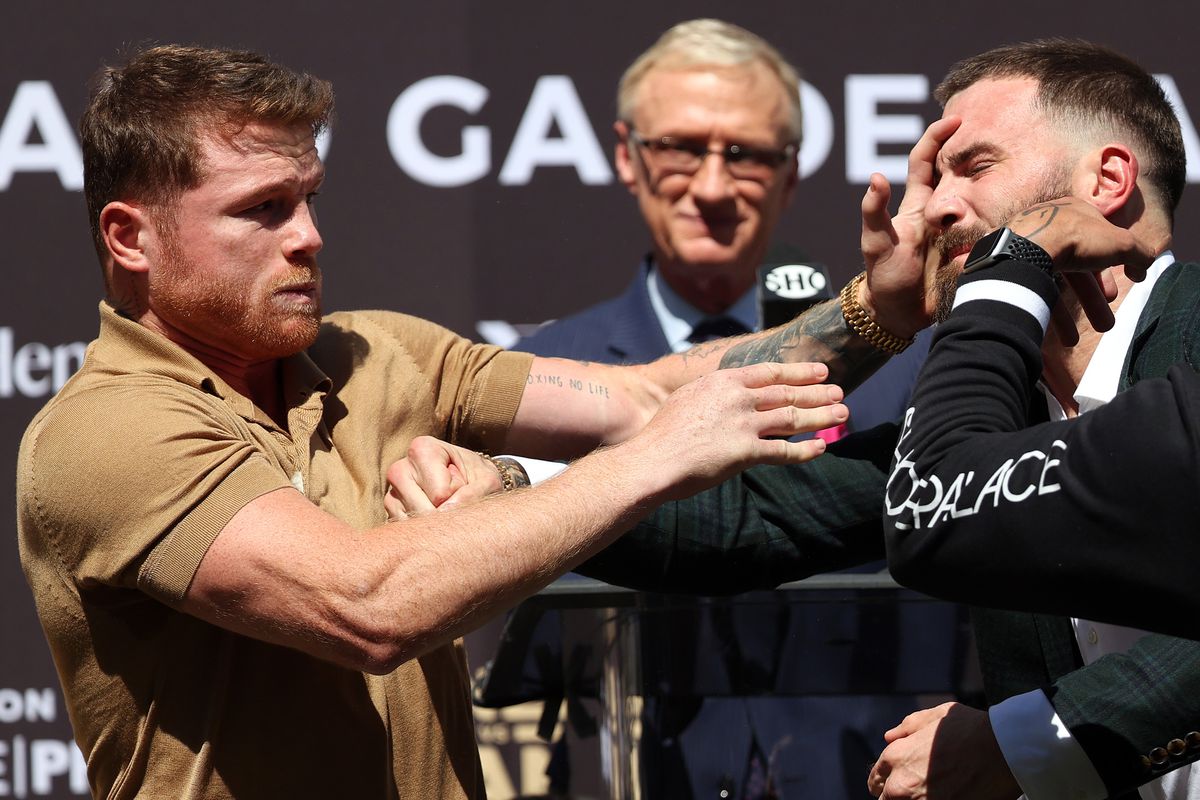 Canelo Alvarez believes that his brief physical exchange of punches with IBF super middleweight champion Caleb ‘Sweethands’ Plant on Tuesday at their press conference was enough to unnerve him mentally to the point where he no longer believes he can win.

It’s an enjoyable quick analysis by Canelo in taking one-split second interaction with Plant (21-0, 12 KOs) to sum him up and right him off entirely for their November 6th fight at the MGM Grand Garden in Las Vegas.

Unfortunately, for Canelo, it might not be that easy. Plant will likely not hoist up the white flag of surrender after one split-second exchange on November 6th.’

The Tennesse native will be looking to get his pound of flesh on the night, and he’s not going to quit in the first round from one punch.

During their press conference, Canelo got physical because, according to him, Plant “crossed the line” by calling him a “mother f***r.” But it looked like Canelo was already worked up emotionally way before Plant used that label on him.

Canelo seemed more bent out of shape at being called a “drug cheat,’ which Plant called him based on his positive test for the potent PED clenbuterol several years back.

When Plant began calling Canelo a drug cheat, that’s when it seemed like he lost it. When the two came together, it was a forgone conclusion that Canelo would get physical with Plant due to his pent-up rage.

“He started talking a lot of things, and then the bad thing is he said ‘mother f***.’ You can say a lot of bad things to me, but not to my mother, and that’s why I pushed him,” said Canelo to ESPN on why he started the brawl with Plant on Tuesday.

“Then he came back with a left hook. That’s why what happened happened. ‘Mother f****,’ he says that. That’s not good for me. Yeah, you passed the line. He landed first, and then I, I don’t know how I responded quickly. It’s not a cut. It’s a little bit.

“Right here, but nothing crazy. It’s fine,” said Canelo about him suffering an injury to his left elbow. I will win all the fight, don’t worry.

“Nothing, he’s a very insecure person. So you can see in his body language, and that’s all I take,” said Canelo in his analysis of who Plant is as a person,” Canelo said.

Boxing fans aren’t buying Canelo’s excuse for why he decided to get physical with Plant. They don’t believe it was because he called Canelo a “Mother f***.”

They think Canelo couldn’t handle being outtalked by Plant, who obviously can talk circles around Canelo due to him being American with his English skills.

More than that, Plant came to the press conference well prepared, knowing precisely what he was going to say to Canelo, and his words set the Mexican star into a boiling rage, causing him to get physical.

If Canelo is going to be attacking Plant physically in future press conferences, the promoters should keep the Mexican star somewhere else.

If Canelo can’t control his instincts, the promoters will need to keep him away from Plant.

“He lost [confidence] already. In his mind. He lost already because he thinks differently,” said Canelo about his belief that Plant learned from his brief exchange with him that he’s in a dangerous place.

“He’s going to come into the fight and try and push me, but he’s in a dangerous place. Yeah.

“I don’t care about that. That’s why I say he’s an insecure person because he’s behind everything. He’s grabbing something to laugh.

“He’s an insecure person. I don’t care,” Canelo said when asked about his thoughts on Plant going after his trainer Eddy Reynoso.

“He can say whatever he wants. Nothing. Eddy Reynoso is the guy, and I’m calm and waiting for November 6th. He’s [Plant] in my top fights. We’ll see if he’s in my top opponents after the battle. I don’t know yet.

“He’s a good boxer, and he’s got some good moves. He has a good jab, but I have a lot of experience, and I know how to fight that kind of fight, that kind of style. So I’m ready,” said Canelo.

It will take more than this brief incident that took place on Tuesday for Canelo to beat Plant. Canelo sees things that aren’t there in his mind, painting a fantasy picture of Plant cowering on November 6th and not throwing punches.

That’s a cartoon image that Canelo has created, and he needs to think clearly and realize that he’s not going to be fighting a cartoon. This is a real person, who has been through a lot in his life, and he’s going to be trying to win at all costs.