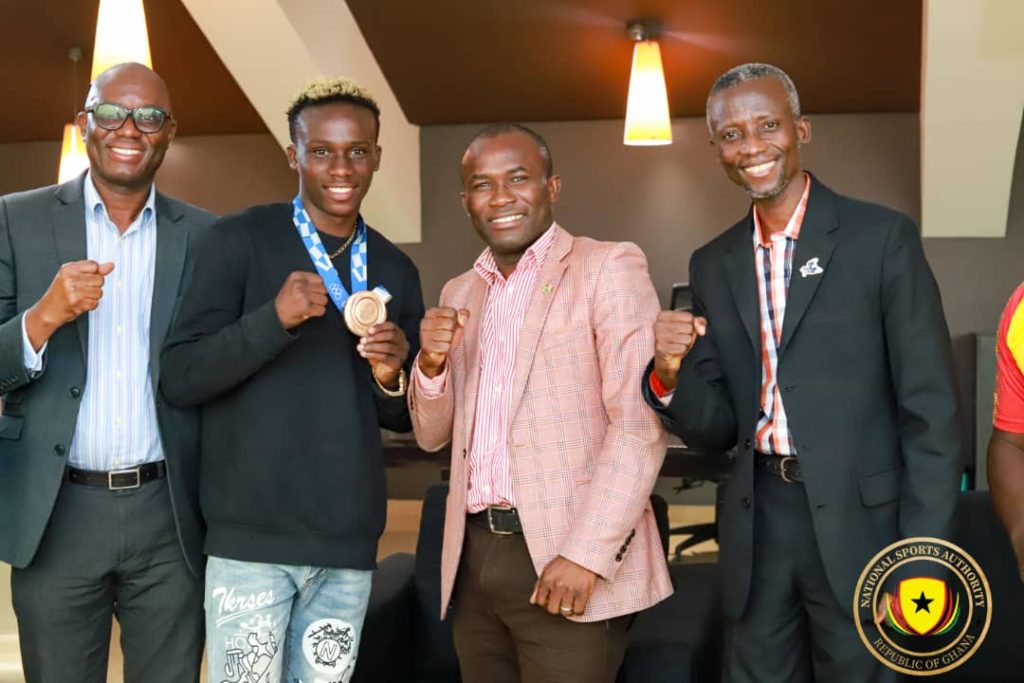 On Thursday, 23rd September, 2021, a delegation led by the President of the Ghana Boxing Federation (GBF), Mr. George Lamptey paid a courtesy call on the Director General of the National Sports Authority, Professor Peter Twumasi.

The purpose of the visit was to officially present the medal Samuel Takyi won and then also, to thank the revered NSA Boss for his exceptional contribution to Team Ghana during the 2020 Olympic Games in Tokyo.

The President of GBF in his opening remark thanked the Director General for the immense supports and recognition from the Authority. He stated that despite the challenges they have faced, the NSA has regarded the federation as a priority and this, he is very much grateful.

He acknowledged the Authority as its mother figure and owes them every success they chalk in any tournament, George Lamptey stated.

The head coach of the Federation, Mr. Ofori Asare, added that through the Authority’s support they emerged champions in the global tournament.

He mentioned that, 8 boxers have recently been listed among the world champions with Samuel Takyi ranking 1st in Africa and he is hopeful, the team will produce better results in the upcoming Common Wealth Games in Birmingham, UK.

He applauded the NSA for recruiting coaches across the country by providing them an opportunity to have a career in the sport.

The Communications officer of the federation,Jojo Ephson equally used the opportunity to commend the Authority for the contribution to their members during the lockdown in the form of monthly allowances.

He pleaded for the same support ahead of any bout.

The Director General of NSA, Prof.Peter Twumasi during his initial comments, was left impressed with the constitency and recognition from the federation. He personally applauded President Nana Akufo-Addo for the good works he’s doing for sports and credited Ghana’s achievement at the Tokyo 2020 Olympic Games to His Excellency.

He advised the team to keep the good works and make adequate preparation ahead of the Common Wealth Games and the African Games which will be starting soon.

To show his appreciation, The Director General rewarded each Boxer with GHS 5,000, to be shared among the coach and his assistant and GHS 10,000 to be put into a developmental fund for the entire team, all amounting to GHS 30,000.

Members from the federation took turns to show appreciation whiles Samuel Takyi, the only Ghanaian bronze medalist at the Tokyo2020 Olympic Games presented the historic medal to the NSA Boss and his deputies.

The Deputy Director General -Administratio, Mr. Majeed Bawah, equally used the opportunity to encourage the team to work hard, be focused and stay disciplined whiles he pledged the Authority’s unflinching support to them.

Mr. Kwame Amponfi Jnr, the Deputy Director- Technical, on his part thanked the Director-General for the newly recruited assistant coaches since there was the need for technical handlers.

He encouraged the team to show similar commitment in the Common Wealth Games and African games and make Ghana proud again.