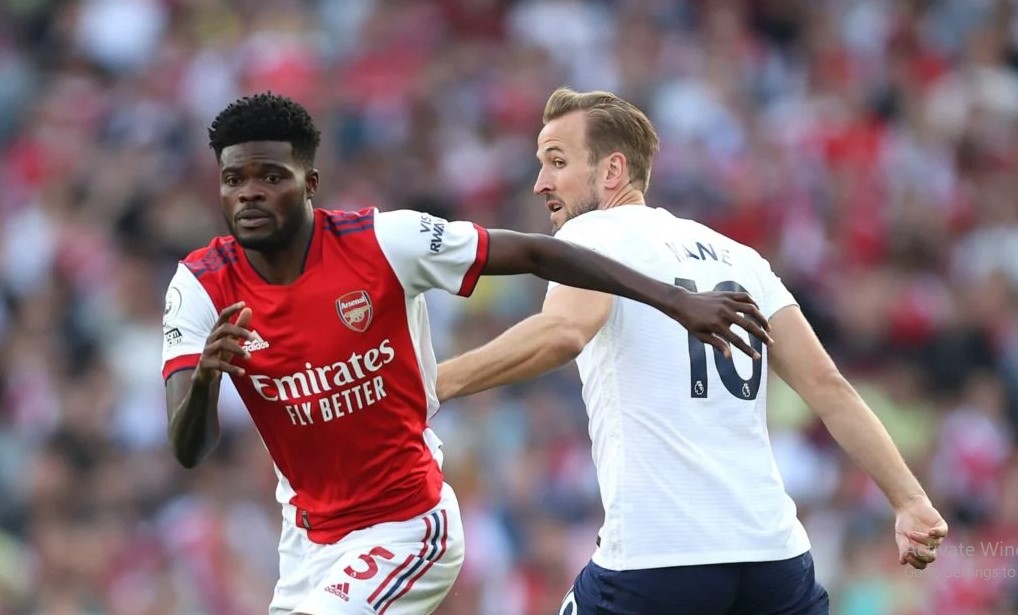 Ghana star, Thomas Partey was impressive on Sunday as Arsenal continued their revival with a brilliant victory over Tottenham in the Premier League.

Partey dominated midfield with his accurate passing, eye-catching long balls and wonderful interceptions coming in handy for the Gunners as they won 3-1 at the Emirates.

The Ghanaian missed the first three games of the season with an injury. In his absence, Arsenal found themselves in the bottom three after zero points.

His return to action has coincided with the Gunners playing some good football and winning games. They have now won three straight games and as a result, sit 10th on the table.

Partey since joining the Gunners has shown flashes of his brilliance and Sunday was no exception. Injuries are the only thing stifling his progress.

He has suffered four different injuries since his Arsenal debut and missed a total of 21 games.

Arsenal earned the bragging rights in the North London derby as they breezed past their rivals Tottenham Hotspur at the Emirates.

Emile Smith-Rowe and Bukayo Saka impressed in the derby as both youngsters scored and assisted in the comprehensive victory.

Smith-Rowe scored the first before Pierre-Emerick Aubameyang and Saka added two more before half time. Heung-Min Son scored a consolation for Spurs late on.

Questions are already being asked of Nuno Espirito Santo’s suitability for the role of Tottenham boss, just 88 days since he took charge – this was the first time in 18 years that Spurs have conceded three goals in three successive Premier League games.

They sat top of the league ahead of the international break, their fans taking great pleasure in seeing Arsenal propping up the table.

This emphatic win, however, sees Arsenal go above their neighbours as they continue to recover from a poor start to the campaign.

Son and Aubameyang both had early chances which were missed before ultimately being flagged offside.

It was the hosts, however, who had started the game the brighter and they duly delivered the opening goal just 12 minutes into the contest.

Martin Odegaard had time and space to spread the ball wide to Saka, whose low cross into the box was swept home by Smith Rowe, who arrived unmarked to send the ball past Hugo Lloris.

Thomas Partey then stung the palms of Lloris with a rasping effort before Aubameyang sent an effort whistling over the crossbar.

Arsenal did look nervy when Spurs could attack, mixing up a clearance before Son drew a smart stop out of Aaron Ramsdale.

Soon after and the home side had doubled their lead, countering at pace as Smith Rowe this time turned provider – bursting into the box and squaring for Aubameyang to finish.

Tottenham wanted the goal chalked off for a foul on Pierre-Emile Hojbjerg but the challenge from the returning Granit Xhaka was deemed legitimate by referee Craig Pawson.

Things would get even better for the Gunners as Saka would get in on the act to make it 3-0.

Partey stole the ball off Harry Kane and Arsenal again broke behind the Spurs defence with three passes.

Smith Rowe found Saka – who ran into the box and was challenged well by a backtracking Kane, only for the loose ball to roll back into the path of his England team-mate who then finished low past Lloris.

Nuno reacted at the interval, introducing Oliver Skipp and Emerson Royal in place of Dele Alli and Japhet Tanganga.

It made little difference at the start of the second half, Arteta up in arms as he wanted a penalty for a foul on Gabriel Magalhaes as Arsenal pushed for a fourth goal.

Spurs were wanting their own spot-kick soon after as Ben White seemed to trip Kane, but Pawson and the VAR remained unmoved.

It did, at least, finally warrant a reaction from Spurs, Ramsdale saving low from a Kane shot which appeared to be heading behind.

The England skipper would then be guilty of missing a fine chance as he outmuscled Takehiro Tomiyasu and ran through on goal only to lift his shot wide of Ramsdale’s right-hand post.

Arsenal were happy to keep possession as the game wore on but Lloris had to be alert to push a low Saka shot wide.

Spurs would get on the scoresheet with 11 minutes remaining, Arsenal’s defence this time granting Son the freedom of their area for the forward to score from Sergio Reguilon’s centre.

A comeback never looked likely but Ramsdale did superbly to tip a deflected Lucas Moura shot onto the crossbar in stoppage time as Arsenal saw out the remainder of the game to go 10th in the table, one place above Spurs.