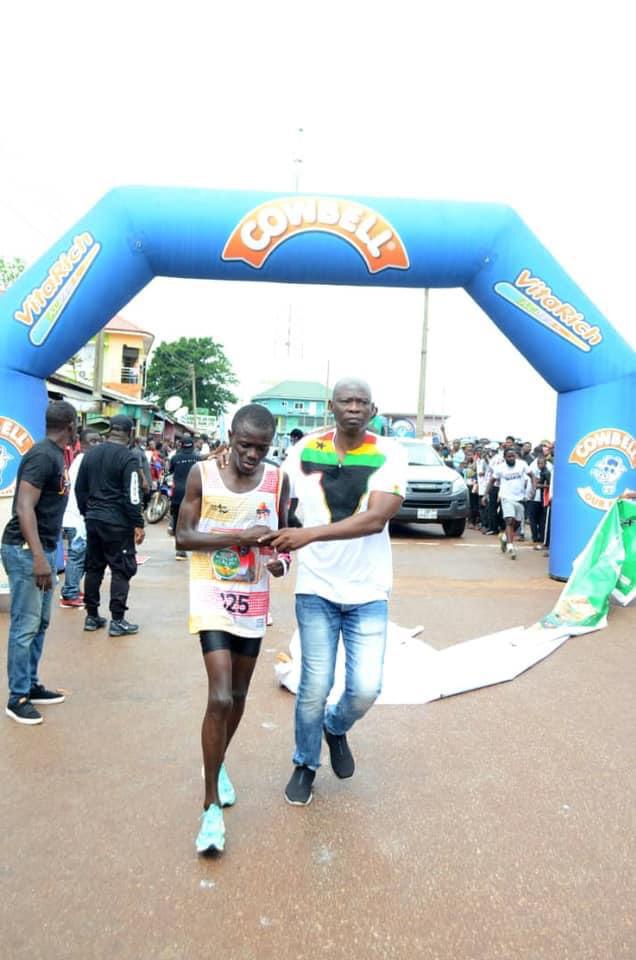 Organisers of the annual Asante Akyem Marathon, Sportlife are waxing lyrical in excitement at the huge impact the now annual race has had on athletics and athletes in this country following the return of maiden winner in 2017, William Amponsah to sweep the field again and carry the ultimate at the 2021 event last Saturday in Agogo, Ashanti Region of Ghana.

In a 21 Kilometre race from Nyabo near Konongo to Agogo on September 25, 2021 which saw two foreigners, Lenold Mukaronda from South Africa and Giacoma Massini from Italy also compete, Amponsah stood tallest after crossing the finish line in one hour, 12 minutes and 39 seconds to beat defending champion, Ishmael Arthur who took second position this time, by nearly two minutes.

Arthur, who won the same competition when it was last ran in 2019, came in at one hour, 14 minutes, 47 seconds whilst third place went to Koogo Atia in one hour, 15 minutes, 22 seconds in a marathon which saw 387 of 463 registered athletes show up to compete for a place in history.

“It feels me with so much satisfaction that our baby, the marathon is affecting lives. We are happy that the athlete who won the first edition has gone on to excel all over, winning lots of competitions and setting Ghana records for both the 10,000 metres and half marathon. Best of all is that he has returned here to win again, it’s just fantastic,” said Hon. Kwadwo Baah Agyemang, CEO of the SportLife organisers.

“It tells you how effective this competition has been, how it’s creating heroes and we are forever grateful to all our sponsors and supporters in all ways” the former Board Chairman of the National Sports Authority added.

Basit Afful and Ataylar Awini Samuel finished 4th and 5th respectively in a race that rewarded 4th to 10th with two hundred Ghana Cedis (Gh¢200) each.

But it was the top runner on the day, William Amponsah of course who went home smiling brightest after bagging a cool Gh¢5,000 (five thousand Ghana Cedis) cash as first prize and an additional fully funded trip to the UK sponsored by Kumasi based Asgab Royal Travel Consult.

“We believe this is our own little way of contributing to the revival of Ghana athletics, its a platform for talents to compete and be recognised and we definitely appreciate the competition put out here today where we saw people racing neck-to-neck up to the finish line,” Hon. Kwadwo Baah Agyemang further stated.

“This is the fourth edition despite the Covid-19 preventing us from doing it last year, we are here to stay and to hone the talents of Ghana’s potential athletes. I will encourage all who are interested in running to all get on board next year and the future, you can’t get it better than this,” stated the former MP for Asante Akyem and proprietor of newly launched Agogo based radio station, Adanse3 FM.

The women competition which took off at Juansa, along with the juveniles for a 12 kilometre run, was won by former Accra Milo Marathon winner, Sakat Lariba in a time of 47 minutes, 14 seconds, well ahead of Berlinda Segbor who finished in 50 minutes, 49 seconds to take second whilst third place was grabbed by Abdulai Ramatu in 50 minutes, 59 seconds.

Lariba, a national athlete and student of the University of Education, Winneba who of course was the Accra Milo Marathon champion in 2015, received a cash prize of two thousand Ghana Cedis (Gh¢2,000) whereas the first and second runner-ups were as promised, rewarded with one thousand and five hundred Ghana Cedis respectively.

Also, Sherifa Moro (4th), Rosina Titti (5th) and all who finished up to 10th spot in the women’s race also received Gh¢100 (one hundred Ghana Cedis) each.

The juveniles had Ntefune Joel placing first, followed by Tetteh Evans, Iddrisu Sumaila, Andy Oulibu and Teye James in the top 5 in that order.

Though the presentation and closing ceremony was drenched in a heavy rain, the organisers and a huge army of spectators amid dignitaries like Deputy Information Minister, Pius Hadzide, National Sports Authority (NSA) Director-General, Prof. Peter Twumasi and former Asante Kotoko and Black Stars midfielder, Yusif Chibsah defied the odds and saw through an overall successful show.

“This has been a very fruitful event, I congratulate all athletes who took part today. The effort alone is worth celebrating, it is the first step to greatness and I was overwhelmed by the number of young women and juveniles who ran today,” said NSA chief, Peter Twumasi in his closing remarks.

“Everybody is praising Samuel Takyi for winning a medal at the Olympic Games but this marathon we just witnessed here shows athletics has more than enough to even do better,” Prof. Twumasi said.

“We have a lot of talents in many sporting disciplines, not just Takyi. Next year we expect to do far better at the Commonwealth Games, I expect athletics to also win a medal for Ghana,” he added in pouring rain.