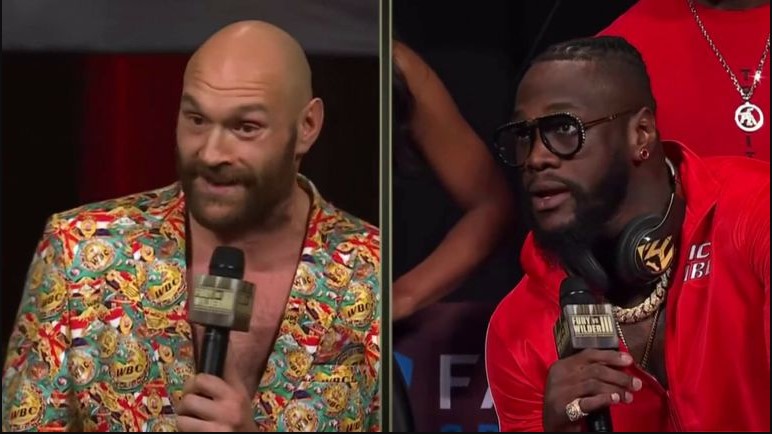 Tyson Fury and Deontay Wilder were denied a pre-fight face-off after a furious row erupted between the heavyweight rivals at the final press conference.

Fury and Wilder became embroiled in a heated dispute, just days before their third WBC title fight, and the feuding duo were prevented from going head-to-head in front of the cameras.

The British star, who claimed the WBC belt with a seventh-round stoppage win last February, had made a dismissive opening speech.

“All these fights are exactly the same to me,” said Fury. “I’ve got some guy trying to take my head off with punches.

“It don’t matter if it’s Deontay Wilder, or whoever it may be. It doesn’t really matter to me, because it’s the Tyson Fury road show.

Wilder made a series of bizarre claims about Fury after his first professional loss, but the American stood by his comments.

“I don’t regret it and I go to my grave believing in what I believe in,” said Wilder.

“I know things for fact. I have confirmation, clarity of a lot of things.

“But the eyes don’t lie.

“It only made me better as a man, as a fighter, to understand and see certain things. To know things for facts.

“It made me even hungrier than before.”

Fury delivered a scathing response by saying: “I beat him the first time after three years out of the ring. Quite comfortable actually. He won two rounds of a 12-rounder.

“I absolutely obliterated him in the rematch. He didn’t even win any of the rounds.

“In this third fight, I just see much more of the same.

“I hope you’ve got your excuse book ready, dosser!”

Issuing a final challenge, Wilder had said: “Tell you guys to prepare yourself on the battlefield, and get ready for war.

“This right here is going to be an amazing fight, come October 9.”

But Fury then sparked a furious exchange with Wilder, littered with insults, and the pair left the stage before the customary pre-fight photos.