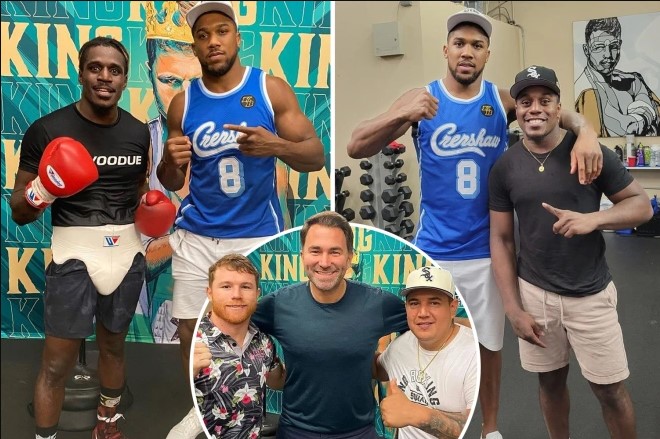 ANTHONY JOSHUA spent his birthday in Los Angeles as he recovers from his Oleksandr Usyk defeat.

The Watford icon turned 32 on Friday and woke up to cake and candles in the USA, after doing a photoshoot with fashion partner Hugo Boss on Monday.

A source in the camp confirmed to SunSport that the Brit hero chose to stay on in celeb-Mecca LA to “decompress” after a gruelling camp and fight.

The former WBA, IBF and WBO king lost his titles to the brilliant Ukraine southpaw on September 25.

But the instant rematch clause has been activated and a Spring 2022 fight is being worked on.

A UK football stadium is the front runner for the rerun but Saudi Arabia remains a strong possibility.

During his visit to America, AJ has been pictured in two notable gyms amid rumours he could change trainers for the rematch.

A link-up with Reynoso would see his train alongside Canelo Alvarez and former rival Andy Ruiz Jr.

Boxing brothers Ronald and Rashidi Ellis took to their Instagram accounts to post pictures of them alongside Joshua at Reynoso’s gym in San Diego, California.

And AJ’s promoter Eddie Hearn was also there on Saturday to pay a visit to Canelo ahead of his undisputed super-middleweight bout against Caleb Plant on November 6.

There is no suggestion yet that Joshua will part ways with trainer Rob McCracken, but Hearn has not ruled out a change.

He told Boxing Social: “I think what AJ will want to do is analyse why he performed like that. Yeah, the tactics weren’t right, he underperformed, but why?

“It’s difficult just to say, ‘He didn’t get the tactics right and he underperformed,’ because let’s talk about the brilliance of Usyk as well.

“But AJ will always look at his preparation and see how he can improve.

“If that’s changing things up, looking at bringing people in, or whatever he’s got to do, he will do that.”

Apart from one post-fight post, AJ has remained absent from social media, to focus on resting and rebuilding for the rematch.

The two-time heavyweight champion insisted in the aftermath of his defeat to Usyk that nobody would see him sulking.

He said: “I am not a sulker, this is a blessed opportunity for me to fight for the heavyweight championship of the world again, so I will not go home and cry about it.

“It’s war and it’s a long process, it’s not one fight and done, it’s back to the drawing board, not to sulk.

“I have already watched the fight and seen where I went wrong and thought of ways I can improve.

“I don’t care about being the underdog for the rematch, the belts don’t represent me. I just want to go in there improved, smarter and stronger and I believe I get a win from what I learned.

“I have no regrets, you have to trust the process, I cannot look at regrets, we had a process we went through and I can go again.

“I have a chance to be a champion again so I am keeping a positive head on my shoulders.”