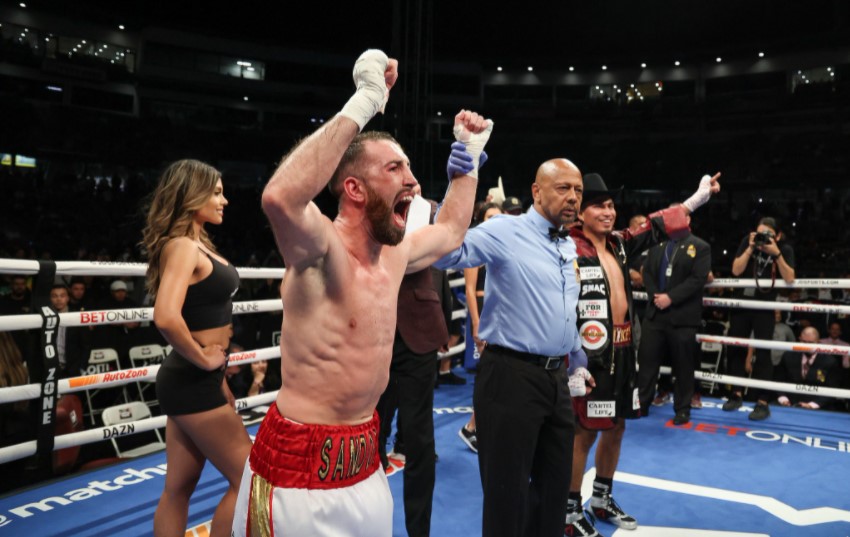 Few boxing pundits outside of Spain were familiar with Sandor Martin prior to being selected as the comeback opponent for Mikey Garcia.

Those who knew him gave him little to no chance of what he was able to accomplish on Saturday evening.

“It’s the biggest moment of my career,” Martin stated to DAZN’s Chris Mannix during the post-fight interview after his breakout victory. “I said all along that I was going to do it, and I did it.”

Garcia—a titlist in four separate weight divisions—had not fought since a twelve-round decision win over Jessie Vargas last February. The ring rust was apparent, as the 33-year-old from Oxnard, California was never truly able to establish a rhythm, while Martin offered constant movement and superior counterpunching in his U.S. debut.

A slow-moving opening round was met with drama as the lights went out in the minor league baseball stadium at the start of round two. Power was quickly restored, though with little offense coming from either fighter. Martin caught Garcia’s attention with a check right hook late in the round, as Garcia continued to struggle to find his rhythm.

Garcia found his offense in round three, enjoying his best moments when Martin’s back was against the ropes. Garcia connected with a right hand and a left hook as Martin was stationery behind a high guard looking to ride out the brief exchange.

Garcia picked up the pace in the final minute of round five, drawing a rise out of the crowd. Martin spent most of the frame pawing with his jab and fighting with his back to the ropes, allowing Garcia to work his way inside and connect with looping right hands.

Martin was forced to contend with a cut over his right eye, though didn’t seem bothered by the wound. Garcia hoped to capitalize on momentum from the fifth round, only to spend most of round six following the Spaniard around the ring. Martin was effective in boxing off the back foot, remaining outside of Garcia’s effective punching range and twice connecting with counter right hooks after avoiding straight right hands.

Rounds seven and eight saw Martin grow more confident in his offense. Garcia continued to come forward but failed to follow up with anything of substance. Martin took the lead on several occasions, though showing sportsmanship in allowing Garcia to recover from a stumble when their feet became tangled.

Martin enjoyed his best sequence of the fight late in round eight, landing a straight left hand that froze Garcia in his tracks. The flow of the fight left the crowd stunned in silence after passionately supporting Garcia throughout the evening to that point.

Garcia enjoyed a more active round nine after landing just three of 25 punches in the preceding frame. Martin continued to prove to be a moving target, with Garcia able to time his fleet-footed opponent with right hands.

Martin offered constant lateral movement in the tenth and final round while Garcia showed a greater sense of urgency than was the case in preceding rounds. Garcia pinned Martin against the ropes long enough to launch a flurry of shots upstairs. Martin was able to block most of the incoming, though not offering much offense in return. Martin continued to move around the ring, circling to Garcia’s right until he was pinned in a corner where he willingly traded with Garcia until the bell.

The late surge saw Martin outland Garcia 31-to-8 according to Compubox statistics, which surprisingly had Garcia landing as many or more punches in six of the ten rounds.

“He fought a very good fight, with his boxing,” confessed Garcia. “I thought I did what was necessary to close the gap, apply pressure and look for a fight. He was the one moving around the ring a lot. He was looking to counter a few times but I was the one actually looking for a fight.”

Martin was looking for the biggest win of his career. He secured it, improving to 39-2 (13KOs) and in a position to collect a major payday for at least his next outing.

Garcia falls to 40-2 (30KOs), with both career defeats coming in the span of his last three fights. A former titlist at featherweight, junior lightweight, lightweight and junior welterweight, Garcia was regarded during significant portions of his career as among the best in the sport.

His place among the industry’s elite took a slight hit after losing every round in a failed welterweight title bid versus Errol Spence in March 2019. The defeat was dismissed by his most ardent supporters as simply taking place outside of his most effective weight and against the best in the division and one of the top fighters in the sport.

However, Saturday marked Garcia’s third straight fight above 140 pounds. A maximum catchweight of 145 pounds was agreed upon between Garcia and Martin, the latter who primarily competes at junior welterweight. Garcia came in well under the contracted limit in search of lucrative opportunities at 140 had he emerged victorious in this fight—which he believed to be the case, though not to the point of discrediting the final scores.

“I thought I was ahead on the three cards,” Garcia insisted, having thrown 87 more punches (318 to 231) but landing fewer (60, compared to 75 for Martin) and at a significantly lower connect percentage (19% to 32%). “It is what it is. That’s why there’s three judges. They decided he was the one winning the fight.”

The difference in competition level between the two was glaringly apparent leading into the fight, with Garcia as high as a -2000 betting favorite. The difference in activity—and ring rust, in Garcia’s case—seemed to play a bigger factor. Martin has fought twice since the pandemic prior to Saturday, while Garcia hadn’t fought in 20 months and with just two fights in more than three years heading into this bout.

The former titlist wasn’t ready to admit that, however.

“He didn’t beat me up, I’m not bruised up or anything,” noted Garcia. “It was a competitive fight, I thought I was winning the fight in a close matchup but the judges saw it the other way around. I knew he was a very good boxer. That’s why I kept coming forward, but I knew I couldn’t be reckless, either.

The scheduled ten-round distance was also the first such fight for Garcia since his July 2016 ring return—a fifth-round stoppage of Elio Rojas—after riding out a contract dispute with former promoter Top Rank for 2 ½ years. The fight with Martin was his first without a title at stake or without a twelve-round limit, having gone that distance in each of his previous five contests.

“I can definitely consider a rematch,” admitted Garcia. “I think two more rounds will probably be better, too. I thought I was coming on a little better in the later rounds. But this was the way it is.”

The way it will remain for months to come, is whether Garcia can turn back the clock at least one more time or if Martin’s upset win signals the end to a years-long run at the top level for a proud former multi-division titlist.