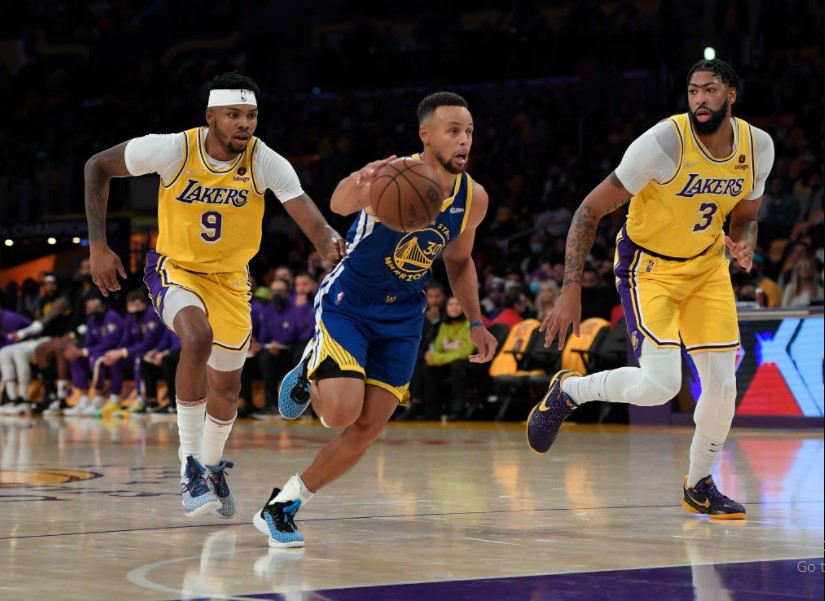 The new-look Los Angeles Lakers aren’t off to an ideal start.

The Golden State Warriors defeated the Los Angeles Lakers 121-114 in Tuesday’s showdown between Western Conference contenders at Staples Center. Stephen Curry, Jordan Poole and Nemanja Bjelica spearheaded the winning effort for the visitors, who are looking to bounce back from last season’s play-in tournament exit.

Impressive showings from LeBron James and Anthony Davis weren’t enough for the Lakers, who debuted a new lineup featuring plenty of noteworthy additions.

Lebron James and Steph Curry during the game

The Warriors are in something of a tread-water mode at the start of this season as they wait for Klay Thompson to return for the first time since the 2018-19 campaign.

Thompson’s absence is one reason Curry led the league in scoring last season while absorbing more offensive responsibilities and keeping his team afloat. It should come as no surprise, then, that the visitors found themselves behind at halftime as Curry struggled with his outside shots and turnovers while facing a physical Lakers defense.

In fact, Curry and Draymond Green combined for eight turnovers in the first half alone during extended stretches of ugly play.

Andre Iguodala and Bjelica provided a much-needed spark off the bench, though, which is one reason the Warriors were still within striking distance even while their stars were struggling to match James and Davis on the other side.

To Curry’s credit, he found other ways to impact the game by facilitating when multiple defenders ran out on him and even contributing on the glass. He found Poole for key outside shots, didn’t turn it over in the third quarter and put his team in position to challenge for the win in the fourth.

Then the Warriors seized momentum for good while actually winning the non-Curry minutes to start the fourth. Poole asserted himself as a scorer both inside and outside the arc, while Bjelica continued to contribute as the unsung hero both as an offensive option and rebounder.

Curry returned and immediately hit a three, but it was far more than him as Golden State put the winning touches on the game down the stretch. The ball movement led to a number of open looks and kept everyone involved, and the Lakers couldn’t counter six players in double figures in the balanced attack.

LeBron and AD Don’t Get Enough Help in Loss

The Lakers are going to be under the spotlight all season.

That is what happens when a team adds veterans such as Russell Westbrook, Carmelo Anthony, Rajon Rondo, DeAndre Jordan and Dwight Howard to a lineup already featuring James and Davis.

Yet for all the headlines the additions made this offseason, it was the pair of Davis and James that staked the Lakers to a six-point halftime lead. LeBron in particular looked like he was still in his prime while flying around defensively, shooting from the outside, attacking off the bounce, rebounding and unleashing smooth pull-ups.

Golden State also had no answer for Davis’ combination of size and touch from mid-range, which helped make up for abysmal shooting from Westbrook and Rondo as the guards combined to go 2-of-11 from the field in the first half.

It was more of the same in the third quarter, as the King unleashed a snarl after soaring for a fast-break dunk and then drilled a three-pointer when the defense backed off. Davis also continued his overall dominance, but the Lakers were up by just two heading into the fourth quarter because nobody outside of that pair scored in double figures.

Los Angeles finally got a spark from someone else in the fourth quarter when Avery Bradley came in to provide defense on Poole and Curry and ended up adding much-needed energy while hitting multiple three-pointers.

Still, it was too little, too late for a team that received excellent showings from James and Davis and lackluster performances elsewhere. Westbrook never found his shooting touch and didn’t even facilitate on his way to four assists, and the defense didn’t have enough stoppers outside of Bradley to end Golden State’s late charge.