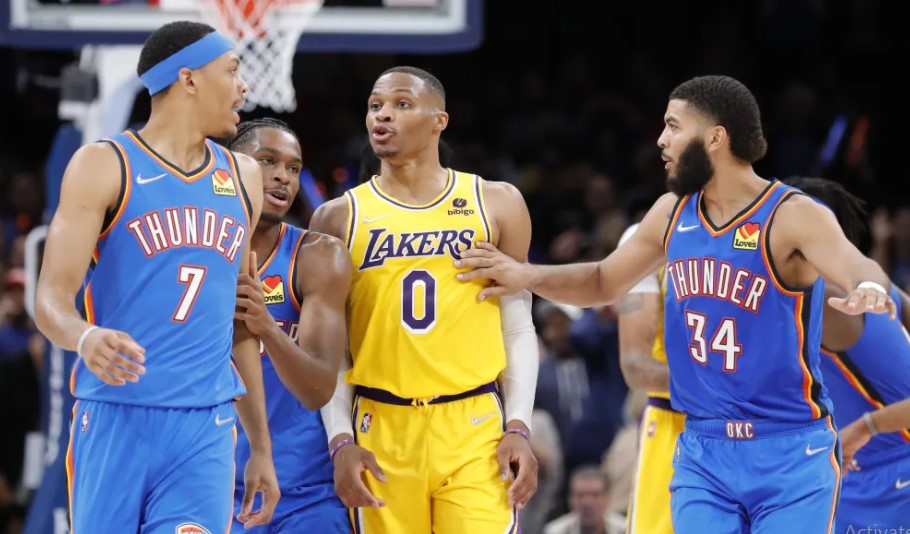 Shai Gilgeous-Alexander scored 27 points to help the host Oklahoma City Thunder rally from 26 down to beat the Los Angeles Lakers 123-115 on Wednesday night.

Where do you want to point as the defining moment of the Oklahoma City Thunder’s 123-115 win over the Los Angeles Lakers, a 26-point comeback for OKC’s first victory of the season?

Maybe it was Shai Gilgeous-Alexander’s buzzer-beater 3-pointer over Russell Westbrook to end the third quarter, capping 14 points in three minutes from SGA and giving the Thunder their first lead of the game.

Maybe it was Mark Daigneault’s late challenge of a foul call on Lu Dort after Dort fought his way around an Anthony Davis screen, recovered against Westbrook, and played good enough defense that, upon review, the call was reversed.

Perhaps it was the out-of-timeout play call in which Gilgeous-Alexander was simply a diversion, and instead Josh Giddey attacked Carmelo Anthony in the lane before dishing to Derrick Favors. Favors’ layup gave the Thunder a three-point lead with 31 seconds to play.

Or maybe it was a play that left the Oklahoma City crowd, for the first time, booing local hero Russell Westbrook.

After Favors put the Thunder up by three, Westbrook took the ball up court. There was no real Just four seconds after inbounding it, he chucked up a 3. It clanked off the glass.

Oklahoma City had breathing room, but when the Lakers trapped Gilgeous-Alexander deep in the backcourt, SGA passed to Darius Bazley. Bazley did not realize how low the shot clock had ticked and was hit with an eight-second violation.

The Lakers called another timeout. There was 17.7 seconds remaining to draw a play, get some space and shoot the 3-pointer they wanted to send the game to overtime.

Instead, inexplicably, Malik Monk used five seconds of the clock before chucking up a 3. It hit nothing but air.

Two timeouts resulted in nine seconds of game time, one bricked 3-pointer and one airball. The Thunder maintained their 3-point lead.

Giddey inbounded the ball, but instead of passing to Dort, he held on and went to the next option. His pass toward Kenrich Williams was off-target and went into the hands of Carmelo Anthony.

With less than 10 seconds in the game, Anthony stepped up for the uncontested look without taking any time off the clock. It was another airball.

And that was it for the Lakers. Oklahoma City finally succeeded in inbounding the ball and getting to the free throw line. Dort made two free throws. That should have been the game.

But the Thunder continued to press. Dort deflected an inbound pass out of bounds, and then Bazley stepped in front of the mulligan and picked it off. He raced down court and threw home an exclamation dunk with 1.5 seconds left.

Westbrook took offense and had some words for Bazley, who broke the unwritten rules.

A tiny skirmish started on the court and Westbrook received his second technical foul of the game, earning the ejection and hearing boos from the OKC faithful as he walked to the locker room.

It was an ugly final 30 seconds, a span in which the championship-hopeful Lakers could not manage the clock, did not use their timeouts well, and had three bad misses on potential game-tying 3-pointers. They couldn’t take advantage of the Thunder practically handing the game back to them. Daigneault, who coached an excellent game, made a near-fatal mistake of not calling a timeout when Gilgeous-Alexander was trapped.

LeBron James did not play, but that should not have been an issue for Los Angeles. Two of their stars should have been able to take down the winless Oklahoma City Thunder team.

Instead, Gilgeous-Alexander toppled the powers on the court.

After playing decent to start the game, Gilgeous-Alexander went berserk in the final three minutes of the third quarter. In that time, he scored 14 straight points for the Thunder, nine of them coming off 3-pointers. He had 17 total points in the quarter and capped it with a buzzer-beater over Westbrook.

His improved step-back has been on display this season, and it shined the brightest it has during that third quarter on Wednesday night. Gilgeous-Alexander has begun to step sideways into the shot, but this one against Westbrook was a true step-back attempt before creating space off to the side.

He finished with 27 points, nine rebounds and five assists.

Bazley had a bounceback game with 20 points, six rebounds and four steals. He struggled mightily over the first four games of the season, but in going 4-for-8 from 3, he gave himself and the team a spark, one that ended in the explosion of Westbrook walking off the court.

Isaiah Roby similarly played well after losing playing time throughout the first four games of the season, finishing with 13 points in 16 minutes of play.

Giddey had 18 points and 10 assists, his first NBA double-double and the most assists he has had at this level.

Westbrook finished with a triple-double of 20 points, 14 rebounds and 13 assists, but he had 10 turnovers — including three in a row from the 10-minute mark of the fourth quarter to the 9:16-mark — and went 2-for-8 from 3, including a pair of misses in the final four minutes of the game.

If you’re going to choose one moment, maybe it was less tangible than a made 3-pointer or a nicely drawn-up play. Maybe it was a flip in the second quarter. After being outscored 41-19 in the first quarter, the Thunder started putting shots in the hoop. They started playing defense. They looked like a team. And they slowly chipped away at the deficit, first with a 37-point second quarter and then a 41-point third.

Los Angeles, meanwhile, struck the opposite chord, scoring 31 points in the second, 23 in the third and only 20 points in the fourth quarter.

The 26-point comeback ties the Thunder franchise record, having done the same against the Houston Rockets on Feb. 9, 2019, and against the Chicago Bulls on Dec. 16, 2019.