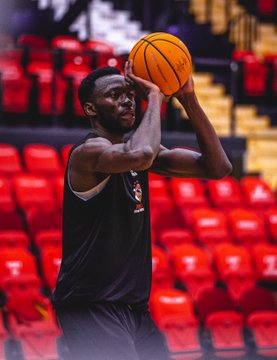 Ghana Center Amida Brimah has arrived in Belgium to join Filou Oostende in the top flight division. Ghana’s leading basketball portal can also report Brimah has trained with his new team and teammates.

Brimah proved an outstanding addition midway through the season as his tenacious defense and rim protection set Guaynabo up for the epic run.

Joining Oostende marks a return to Europe for Brimah who played briefly in Serbia for Partizan Belgrade after winning the NBA Gatorade League title in 2018 with Austin Spurs.

His addition is a major boost to the league leading Filou that has 10 wins in 10 games played this season; the team competes in the FIBA Basketball Champions League and presents Brimah the chance to win more silverware in his professional career.

Brimah won the National Championship during his time at the University of Connecticut.