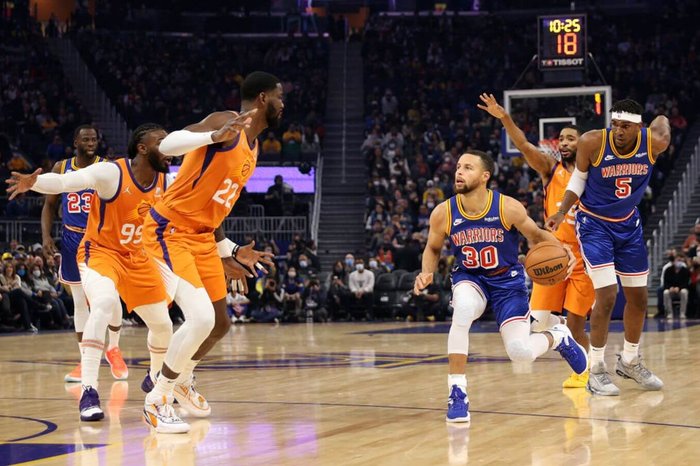 The historic run is over.

The Golden State Warriors snapped the Phoenix Suns’ franchise-record 18-game win streak Friday night 118-96 before a sellout crowd of 18,064 at Chase Center. Devin Booker missed his second straight game with a left hamstring strain suffered in the first half of the Suns’ home win Tuesday over the Warriors.

The Warriors (19-3) hadn’t had a game since Tuesday’s loss while this was the second of a back-to-back for the Suns (19-4), who topped the Detroit Pistons at home Thursday.

The Warriors led by as many as 27 in avenging Tuesday’s loss as Stephen Curry scored 23 points after an historic off shooting night.

Mikal Bridges suffered a dislocated right pinky finger in the first quarter as the Suns’ starting three finished with just seven points on 2-of-7 shooting.

Here are five takeaways from Friday’s first loss in over a month for the Suns after they went 16-0 in November:

Curry had just 12 points in the first of three meetings within 30 days between the Warriors and Suns, with the final one coming Christmas Day in Phoenix.

It was a combination of Golden State creating switching opportunities to get Bridges off him, Curry being more effective and him simply making shots.

Steph Curry scored a team-high 23 points for the Warriors

2. Bridges playing with the dislocated finger speaks to his toughness, but with Booker out, Phoenix needed Bridges to be more aggressive.

He wasn’t. He seemed to get more comfortable handling the ball, but didn’t look to score.

In his fourth NBA season, Bridges has never missed an NBA game, so he’s truly been the team’s iron man, but the Suns needed him to go for his offensively Friday night.

3. Golden State stepped up its aggression level and it paid dividends in many ways. The best example of that was Kevin Looney.

He’s nowhere near the talent of Deandre Ayton. That’s even more evident when Looney isn’t playing with energy as that was the case Tuesday night. Ayton took it to him in going for 24 points and 11 rebounds.

Three days later, Ayton still put up the better numbers — 23 and six — but Looney made some key hustle plays, got a scrappy bucket and matched Ayton on the glass.

That can’t happen for Phoenix, especially when Ayton played 32 minutes to Looney’s 15.

In short, Looney and the Warriors made the Suns’ big man work to the point that when Gary Payton II scored on a follow-up inside, Ayton didn’t even try to block it.

4. Monty Williams was upset after the Suns gave up a corner 3 to Payton that led to him calling a timeout with 9:33 left in the game.

Payton is a career 28.8% shooting from deep, but he came into Friday’s game making 36% of his 3s on the season. So he can’t just be left wide open.

5. Phoenix will have two days between Friday night’s game and Monday’s rematch with the San Antonio Spurs.

Then they’ll have four days between Monday’s game and next Friday’s action against the Boston Celtics.

So Phoenix will have time to give guys rest as Booker looks to return from his injury.

The Suns have eight game between now and that Christmas Day battle with Golden State. Looking to see how they respond to not only the streak ending in a lopsided loss, but continuing to be short-handed.