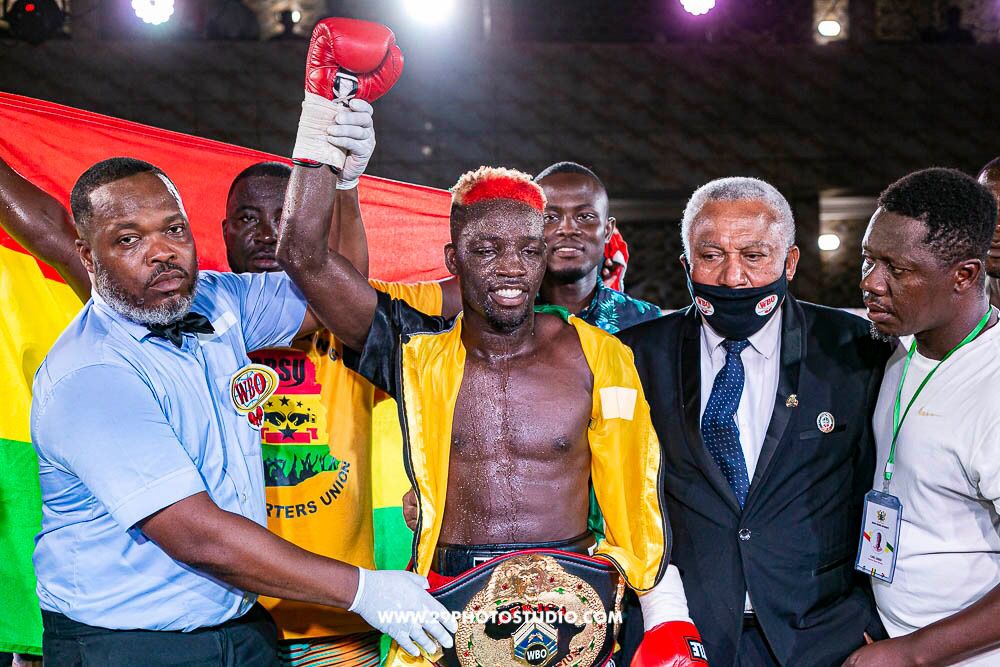 Quaye, a former Ghana champion was in no mood to let his fans down and went straight to work as soon as the bell sounded for the opening round, dishing out a plethora of jabs even as the Tanzanian never felt threatened.

It all changed however in the second round as Quaye twice knocked down Amos who managed to beat the count both times and even though he went down a third time, referee Erasmus Owoo ruled it a slip and amazingly the 22 year old from East Africa survived.

Round 3 however proved to be the coup de grace for a confidence surging Sheriff Quaye as he continued to pummel Amos more than ever before, so much the Tanzanian soon yielded to the effects of  the body shots the Ghanaian kept raining down his stomach chest and head.

Amos managed to once again beat the count of Referee Owoo after going down early in the third stanza courtesy a left uppercut backed with a right jab but as soon as the centre official instructed them to continue with the fight, Quaye once again pounced, what appeared to be a routine left jab to the body of Amos proved the undoing of the Tanzanian as he went down, clutching his tummy and shaking his head in a clear submission that he couldn’t continue no more and sat almost motionless as referee Owoo counted him out to hand Sheriff Quaye victory.

Coach Carl Lokko, in his usual fashion, lifts up his championship winning boxer in the ring in the immediate aftermath of Sheriff Quaye’s audacious victory

The victory not only gives Quaye the win and the Africa title but it also assures the Ghanaian a first voyage into the top of 15 of the next world rankings in a highly competitve lightweight division of world boxing.

“It’s step by step so we are not in any rush, we will sit down and plan what next for Sheriff. Obviously, we have to make defences of the title, face much higher pedigree boxers then we can start talking about world title,” Quaye’s trainer, the highly experienced Lawrence Carl Lokko told journalists in a post fight interview

“It’s true that the lightweight division is packed with many talents and looks very competitive but remember I know this division very well, I’ve competed here to the very top so I’m coming again with Sheriff Quaye. The rest of the world should watch out for us in a year or two no matter the other competitors, we will be ready,” Coach Lokko added, full of poise.