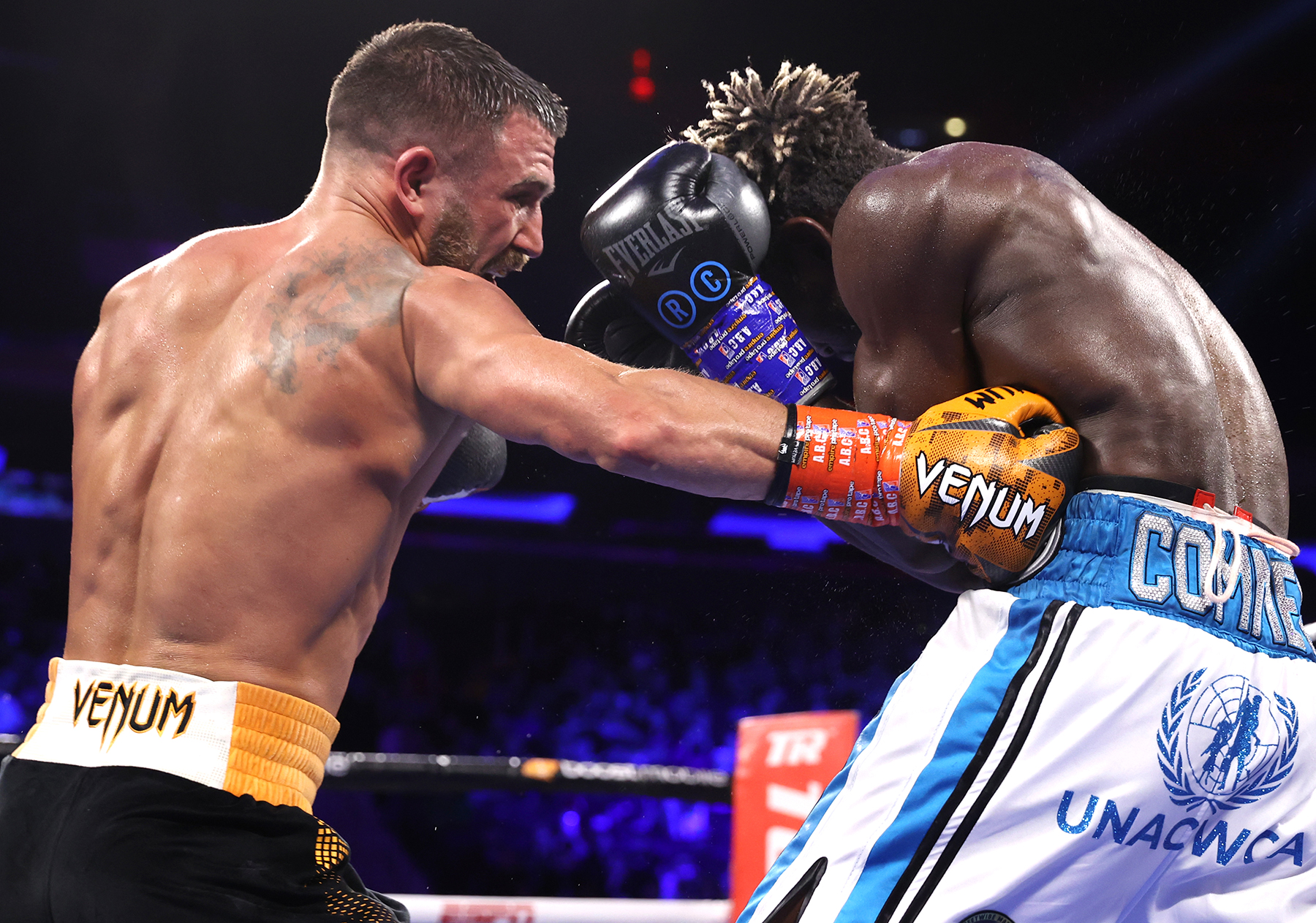 On a mission to become undisputed lightweight champion after he had gotten so close before losing his unified belts 14 months ago, Lomachenko turned in a masterpiece in a lopsided thrashing of fellow former titlist Commey in the main event of the “Top Rank Boxing on ESPN” card at New York City’s Madison Square Garden. The Garden was hosting its first fight card in the main arena in two years due to the coronavirus pandemic.

Lomachenko, who dropped Commey in the seventh round and nearly stopped him, won by scores of 119-108 twice and 117-110, much to the delight of the pro-Lomachenko announced crowd of 8,555. The Ring had Lomachenko winning 120-107.

Three-division champion and two-time Ukrainian Olympic gold medalist Lomachenko lost his unified titles to Teofimo Lopez by decision in October 2020 but fought with a torn right shoulder that was operated on after the fight.

Unable to secure an immediate rematch, Lomachenko returned in June and showed he was still a force to be reckoned with in a one-sided ninth-round stoppage of Japanese contender Masayoshi Nakatani. He put on a similarly outstanding performance against the tough-as-nails Commey other than getting a stoppage.

“He’s a little bit quicker. He throws combinations very well and that’s what makes him special,” said Commey, who was taken to the hospital as a precaution.

From the outset, former pound-for-pound king Lomachenko, a southpaw, showed off his tremendous movement by landing shots and quickly dancing away from Commey’s attacks.

Lomachenko (16-2, 11 knockouts), 33, fighting his seventh opponent in row with a height and reach advantage, strafed Commey with straight left hands throughout the fight, including a tremendous one that rocked Commey at the bell ending the second round.

Lomachenko said after the fight that he used the first and second rounds to figure Commey out and had done so by the end of the second round.

Commey (30-4, 27 KOs), 34, of Ghana, had some success with chopping shots on the inside in the third round but that was before Lomachenko unleashed a three-punch combination with every punch landing, including a head-snapping left hand. Later in the round, Lomachenko rocked him again with a left uppercut.

There was little Commey could do to fend off Lomachenko’s pin-point combinations, like one he landed in the fourth round — a sharp three-punch combination that finished to the body.

“It’s always important [to throw body shots]. In boxing, you can’t use just one punch,” Lomachenko said. “You have to use from body to head.”

It was more of the same round after round, as Lomachenko picked Commey apart to the head and body. Commey’s best weapon was his body attack but he could not land enough to slow Lomachenko down.

As dominant as Lomachenko was, he had his biggest moments in the seventh round, in which he dropped and nearly finished Commey, who was a wobbly mess but made it out of the round on sheer heart.

Lomachenko cracked Commey with a clean left hand for a knockdown but he beat the count and, although he looked badly shaken, referee Steve Willis allowed the fight to continue.

“I took my eye off him for a second and then, boom,” Commey said. “I just took my eyes off him and then that’s it. It is what it is. He’s a great fighter. I did what I had to do. I’m good. I’m not hurt. Nothing happened to me.”

As Lomachenko continued to batter Commey, Lomachenko stepped back from his assault, looked to Commey’s corner and implored his team to stop the fight.

Trainer Andre Rozier would not, so Lomachenko continued his assault. He staggered Commey, who fell into the ropes, and Lomachenko again looked to Commey’s corner and yelled at his team to stop the fight. Again Rozier did not stop it and Lomachenko finished the round pounding Commey.

“I saw his situation. It was very hard for him. That’s why I said, ‘Hey, stop the fight.’ He is a true warrior,” Lomachenko said. “He has a big heart and we continue and we show for people 12 great rounds.”

Rozier defended his decision not to take Lomachenko’s advice and stop the fight.

“Richard is a warrior and Vasiliy is a great champion and when he signaled to stop it, for me to take [Commey’s] pride and his energy and his diligence away would have been a horrible thing to do,” Rozier said. “I told Richard to get up and let’s get it together and try not to make any mistakes and keep working. As you see, he did go the entire 12 rounds of this fight and he fought his heart out.

“Vasiliy is a fantastic fighter and he brought it to the table and these guys put on a fantastic show tonight.”

Commey seemed to get his legs back under him in the eighth round but continued to take punishment while showing a world-class heart inside the same ring in which, two fights earlier, he had lost his IBF title by second-round knockout to Lopez, who then beat Lomachenko to unify.

Even when Commey had some success in the 10th round, Lomachenko nullified it with a blistering six-punch combination.

Commey continued to gun for a miracle knockout as he engaged Lomachenko toe to toe for parts of the 12th round but he never could find the big punch and it was obvious who had won when the bell rang.

“My ambitions are the same. I want to be a two-time world champion,” the disappointed Commey said. “As long as my people believe in me, I will always represent them.”

The punch statistics were overwhelmingly in favor of Lomachenko, who landed 248 of 554 punches (45 percent) while Commey landed just 73 of 614 shots (12 percent), according to CompuBox. Lomachenko outlanded him in every round, limited Commey to single digit connects in every round and his 248 landed blows were the most by a Commey opponent.

With The Ring’s No. 5-ranked lightweight Commey vanquished, the question is, what is next for Lomachenko? Lopez lost the unified and Ring titles by split decision to Australia ’s George Kambosos Jr. on November 27 at the Garden’s Hulu Theater and Lomachenko hopes to meet him next.

“I need this chance. If God gives me this chance, I take it,” Lomachenko said.

Lomachenko, rated No. 2 by The Ring at 135 pounds, is ranked No. 1 in the WBO and could get a mandatory shot, although it remains to be seen when that would be ordered. Kambosos has been making the rounds and watching all of the lightweight action that has taken place over the past two weeks — including WBC titlist Devin Haney’s decision over Joseph Diaz Jr. and Gervonta Davis’ narrow decision over Isaac Cruz last week – before he decides who he wants to pursue for an Australian homecoming defense.

Lomachenko is willing to pack his bags.

Belts or no belts, however, he sure looked like a fighter many would consider to still be the best lightweight in the world. However Lomachenko would not bite on that when asked.