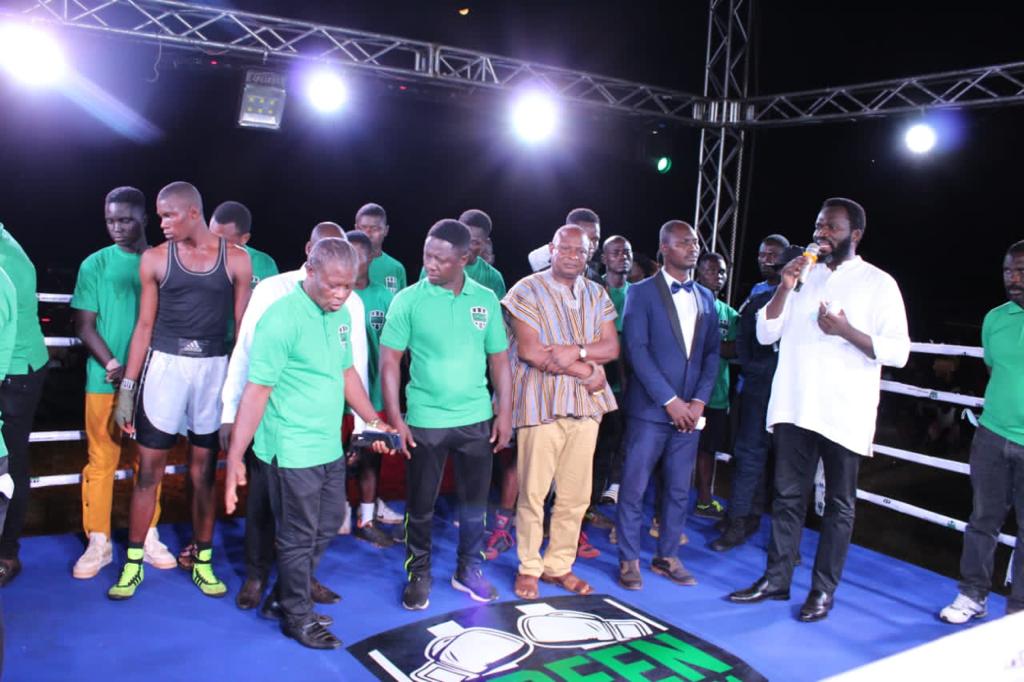 The Green Sports Academy has ended its maiden talents hunt for boxing in Ave-Xevi in the Akatsi North District of the Volta region with founder Dr. Donald Senanu Agumenu underscoring the need for Ghanaians to pay special attention to the sport as it has huge potential for poverty eradication.

“Boxing is serious business. It involves a lot and if we support the local talents here, we can one day produce world champions. We will smile as a society just with one champion,” he observed.

Dr. Donald Agumenu speaks in the ring during the event

The event, which took place on boxing day was streamed live on GTV Sports+,  much to the admiration of patrons as it was a novelty which put Akatsi North on the map. A total of seven explosive bouts were held on the night.

Dr. Agumenu advised the boxers, most of them amateurs, to take their sport with utmost discipline , dedication and build strong character with passion if they truly want to be part of history as acclaimed sports men .

“I am happy for the event today. I am equally thrilled that our youth who are desirous of taking up boxing as a career now have the opportunity. Every ultra modern facility will be provided here in Akatsi North and region for our local boxers to hone their skills and master them. They need not travel to Accra or the United States,” he said.

Dr. Agumenu, a well known philanthropist in Akatsi North, thanked the chiefs who have donated large tracts of land to be used in building an ultra modern sports complex to house football, boxing and other sports development activities.

The Green Sports Academy’s total night of boxing was in partnership with Bronx Promotions which is under the able tutelage of internationally acclaimed boxing coach, Lawrence Carl Lokko.

Under the patronage of Mr. Foster Enam Dagadu, President of the Volta Regional Ghana Boxing Federation (GBF), all seven bouts on the night were duly sanctioned.

Young amateur boxers who proved promising were chosen to enter the Green Sports Academy nucleus of embryonic talents to lead the task of becoming not only development agents in the region but worthy ambassadors for Ghana and Africa as a whole.

In the event, Atakpa Paul of Ave-Xevi locked horns with Wisdom Patu of Ave-Dakpa where they both showed their mettle. Treve Ben of Ave Afiadenyigba and Francis Nupe of Dzodze Tsiaveme sold out a scintillating give-and-take akin to pound for pound duels.

Badzi Christopher of Ave-Xevi and Divine Kwao of Ave-Seva were not left out, as the two, who entered the boxing ring for the first time in their lives, attempted a go-kill street brawl at each other for which the ring-inside referee had to intervene several times  prompting them to keep the fight clean.

Famous Volta Region musician, Edem was on hand to offer his support with a heartstopping performance in the ring as the hugely excited fans sang his songs all night long

Another package of pulsating but dramatic action was in store for patrons when Numakpor Godsway was knocked out cold by Steve Appiah in round two. Philip Ajom and Joseph Commodore did not forgive each other as they traded a barrage of hooks and upper cuts.

Ebenezer Yartey and Sylvain Koku, both under the tutelage of Carl Lokko’s Bronx Promotions renewed in-house hostilities when they stepped into the ring. It was Sylvain Koku who displayed superior mastery of pugilist intelligence and landed more punches on the night to emerge winner.

Former Africa champ, Dodzi Kemeh and his good friend, Kofi Manu sold out a beautiful exhibition of professional boxing to thrill the fans in Ave-Xevi

The professional event on the night was a catch-weight fight between upcoming Volta sensation, Kemeh Dodzi (26 Fights, 24 Wins, 2 Losses -22 KOs) and Kofi Manu (23 Fights – 14 Wins, 9 Losses, 11 KOs). Ring side announcer, Mustapha Nettey announced that the two battled to a draw.

The boxing night also afforded opportunity for local music artistes to entertain the crowd. The hits of local rapper Startick and afro-soul singer Jango Boy kept patrons on their feet for hours.

Edem greets the dignitaries on arrival at the fight ground

Edem of “Gedeme” fame, took the exciting night a notch higher when he dished out playlist hit after hit, including “Go Harder,” “Woss,” “Toto,” “Over Again” and “Koene.”
There were resplendent displays of traditional music and dance by the Nubuake Cultural Troupe of Ziope which electrified the grounds and evoked the historical roots of Ewe customs and tradition.

Traditional chiefs of various areas within the Akatsi North District were present.  Torgbuiga Adogo Agbalekpor IV, Paramount Chief of Ave Tagba and Torgbui Hodzi Dunyo V of Ave Atanve together with Torgbui Tamakloe XI of Ave Afiadenyigba thanked Dr. Agumenu and his Green Sports Academy for bringing live boxing to their enclave. They said they were willing to support sports development in any measure when called upon.

They appealed to Dr. Agumenu to make the event a regular one in order to help expose and promote the potentials in Akatsi North and the Volta region to the world.