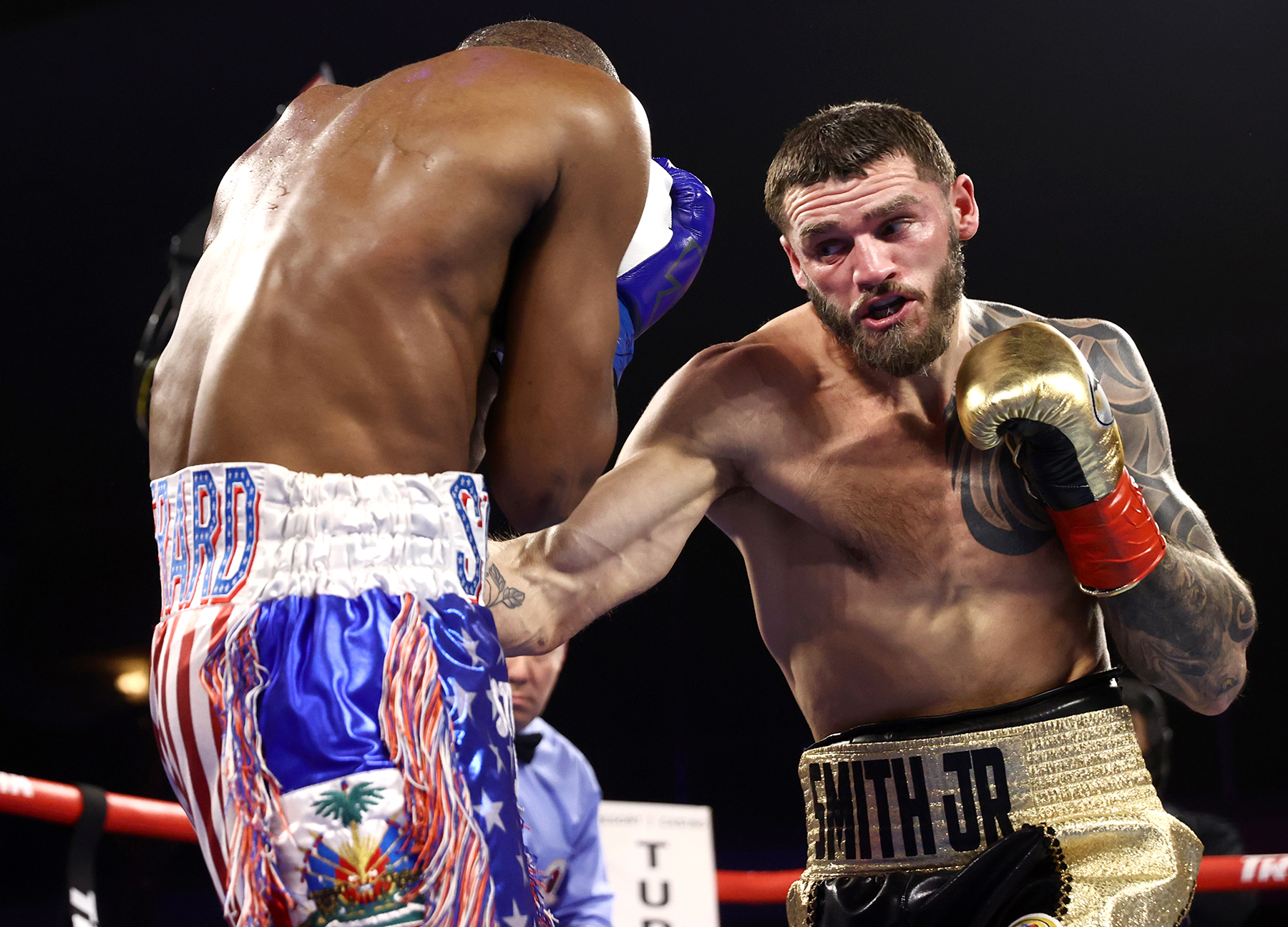 The Steve Geffrard story was something out of a Hollywood script. The South Florida native accepted a shot at the title on eight days’ notice, but he didn’t author the shocking upset. WBO light heavyweight world champion Joe Smith Jr. made the first successful defense of his crown, knocking out Geffrard in the ninth round Saturday at Turning Stone Resort Casino.

Smith (28-3, 22 KOs) was never threatened, as his activity (665 punches thrown) forced Geffrard (18-3, 12 KOs) on the back foot. Geffrard had minor pockets of success in the opening round, but it soon turned into a one-sided exhibition for the Long Island native. He stunned Geffrard with right hands in the fifth and turned up the heat in the ninth. With Geffrard pinned against his corner, Smith unloaded with a combination, and Geffrard went to a knee. Before referee Mark Nelson could finish the 10-count, trainer Kevin Cunningham threw in the towel to end the one-way traffic.

Smith has his sights set on the other division kingpin, IBF/WBC champion Artur Beterbiev. Or perhaps a date with Canelo Alvarez if the pound-for-pound king elects to move up from super middleweight.

Smith said, “He really brought it today. It was a great fight. As you can see, he’s a great boxer, a good survivor. I was trying to get him out of there early, but I realized he was very tough and I wasn’t going to be able to do that. I tried to wait until the later rounds and started throwing more combinations to pick him apart.

“{Beterbiev} is what I want. I want to get back in the gym, work on my craft, and like I say each and every time I get in the ring, I’m going to get better and better. I believe the next time you see me, I’ll be ready for anybody.

“If Canelo wants to come to 175 and fight me, I’m ready for him. That’s the fight I want. Everybody would love to see that fight. It would be a big deal.”

Undefeated featherweight Abraham “El Super” Nova walked to the ring with a mascot and cheerleaders, but he soon found himself in a fight. Short-notice opponent William “El Gago” Encarnacion stunned Nova with an a chopping right in the first round, but Nova (21-0, 15 KOs) settled in and prevailed by eighth-round TKO.

Nova was world-ranked at junior lightweight before moving down to featherweight last year. He survived the early rough patch and plastered Encarnacion (19-2, 15 KOs) with body shots. Encarnacion’s corner saw enough and threw in the towel, much to the shock of those in attendance.

Nova said, “It feels good to fight close to home a day after my birthday. I had a tricky opponent in front of me, but I got the job done.

“I want {WBO world champion Emanuel Navarrete}, to be honest. Everybody thinks he’ll blow me out. Put him in there. Let’s see if he’ll do it. I know I’ll beat him. I know I have the punch output, I know I’ll knock him out, and I know I’ll be the next WBO champion.”

Junior Welterweight: Puerto Rican prospect Omar Rosario (6-0, 2 KOs) learned another lesson in his young career, as he nearly finished off Brooklyn’s Raekwon Butler (4-2, 2 KOs) in the opening round before being forced the six-round distance and winning a unanimous decision (59-54 2x and 58-55). Rosario outlanded Butler 111-49.

Welterweight: Jahi Tucker (6-0, 4 KOs) is fighting beyond his years. The 18-year-old knocked down Akeem Black (6-5, 2 KOs) with an uppercut in the opening round and then finished things off with a flurry in the second. Tucker became only the second man to knock out Black and landed 47 out of 98 punches thrown.

Middleweight: U.S. Olympian Troy “Transformer” Isley (4-0, 2 KOs) threw everything, including the kitchen sink, but Harry Keenan Cruz-Cubano (6-3, 2 KOs) withstood a hellacious beating to survive the six-round distance. Isley tagged Cruz-Cubano with uppercuts in the early rounds and cruised to a decision by scores of 59-53 and 59-54 2x.