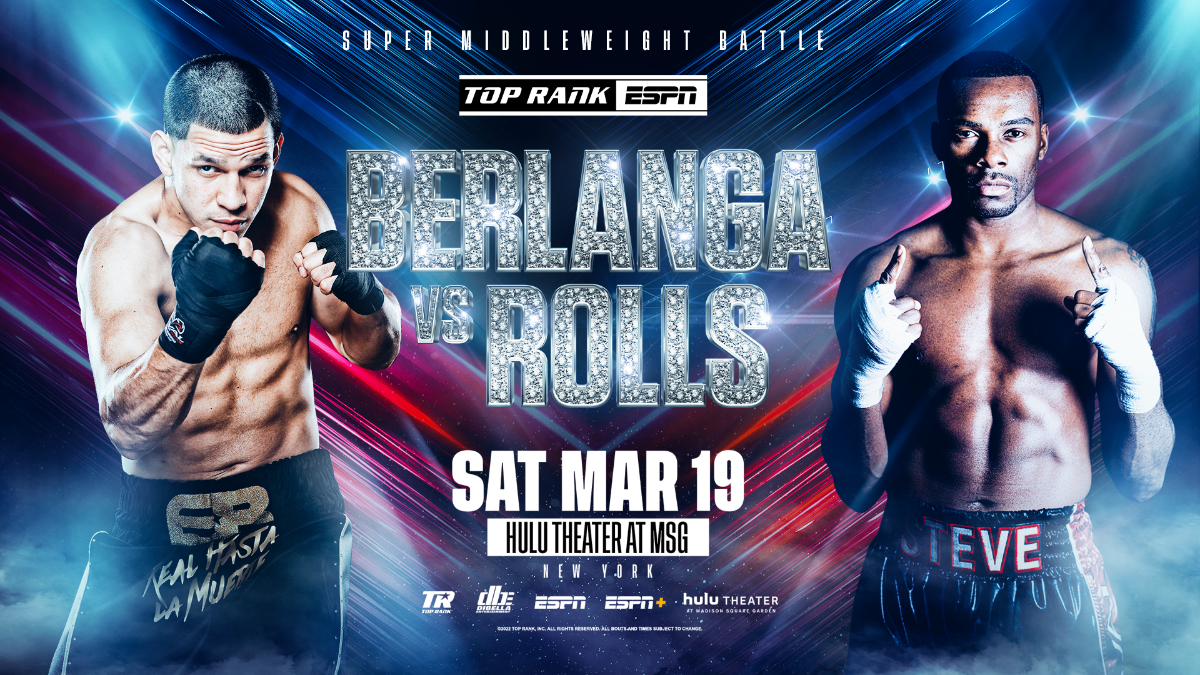 Brooklyn-born super middleweight sensation Edgar “The Chosen One” Berlanga will defend his NABO belt against crafty Canadian Steve Rolls in the 10-round main event Saturday, March 19 at Hulu Theater at Madison Square Garden. Berlanga, whose family hails from San Juan, Puerto Rico, makes his main event debut in his stiffest test to date.

Berlanga-Rolls, Zayas-LaVallais and Davis-Sanchez will air live on ESPN and ESPN Deportes (simulcast on ESPN+) at 10 p.m. ET/7 p.m. PT.

Promoted by Top Rank, in association with DiBella Entertainment, tickets starting at $51 go on sale Friday, Jan. 28 at 12 p.m. ET and can be purchased by visiting Ticketmaster.com or MSG.com.

“Edgar, Xander and Keyshawn are future pound-for-pound superstars, and it will be a special evening in front of a sold-out New York City crowd,” said Top Rank chairman Bob Arum. “All three are in there with the toughest fights of their respective careers, but I expect them to pass with flying colors.”

Berlanga (18-0, 16 KOs) took the boxing world by storm with 16 straight first-round knockouts to open his pro career. He went the distance twice in 2021, opening his campaign in April by knocking down Demond Nicholson four times in eight rounds in an ESPN-televised rout. Berlanga returned on the Tyson Fury-Deontay Wilder III card in October, defeating Marcelo Esteban Coceres via 10-round unanimous decision despite suffering a torn biceps in the third round and the first knockdown of his career in the ninth.

Berlanga said, “I’m so excited to fight in my first main event in my hometown. It’s a dream come true for a fighter representing New York City and Puerto Rico. I can’t wait to show the world what I’m truly about. We are going to blow the roof off the Hulu Theater, so grab your tickets early and get your popcorn ready for this performance.”

Rolls (21-1, 12 KOs), a 37-year-old from Toronto, is an 11-year pro who was an undefeated middleweight contender before moving up in weight. In June 2019, he challenged pound-for-pound stalwart Gennadiy Golovkin at Madison Square Garden and found some success in the second round before being stopped in the fourth. Rolls has tallied two wins since the Golovkin bout, most recently knocking out Christopher Brooker in the ninth round last month on the Artur Beterbiev-Marcus Browne undercard in Montreal.

Rolls said, “I’m happy to be back headlining at Madison Square Garden. Training camp has been going well, and I feel very strong with nothing but war on my mind. Berlanga has power, but I’ll be ready for whatever he brings. I’m looking forward to March 19. I’ll see you then.”

Zayas (12-0, 9 KOs) had a breakthrough 2021, going 6-0 with four knockouts while being mentioned prominently in Prospect of the Year debates. He made his Madison Square Garden debut last December and finished his 2021 campaign by knocking out Alessio Mastronunzio in the first round. He steps up against LaVallais (12-2-1, 7 KOs), who notched a December 2020 upset over Clay Collard at the MGM Grand Bubble. LaVallais, who is 2-2 since the Collard victory, has never been knocked out.

Zayas said, “It’s an honor to fight again at Madison Square Garden, where I know my Puerto Rican people will come out to show their support. 2021 was a great year, but I’m looking forward to an even bigger 2022. Quincy LaVallais is a solid veteran, so I can’t overlook him. I want to make a major statement on March 19.”

Davis (4-0, 3 KOs), from Norfolk, Virginia, won three bouts in the first five months of 2021 before journeying to Tokyo and earning a silver medal. He then signed a long-term promotional contract with Top Rank and improved to 4-0 with a second-round stoppage over Jose Zaragoza on December 11. Davis makes his 2022 debut against Sanchez (18-1, 8 KOs), a 23-year-old from Ensenada, Mexico, who has won two straight bouts and will be making his American debut.

Davis said, “I put on a show at Madison Square Garden in December, and I’m going to do it again. Esteban Sanchez is supposed to be my hardest fight as a pro, but it’s going to be easy work. The Davis Brothers are coming to represent Norfolk and leave no doubt that we are the future of boxing.”

ALL GUESTS AGE 5 AND OLDER are required to provide proof they have received either two doses of a two-shot COVID-19 vaccination, or one dose of a single-shot vaccine.

Government mandates, venue protocols and event requirements are also subject to change, so be sure to continue to check MSG.com for the latest information.