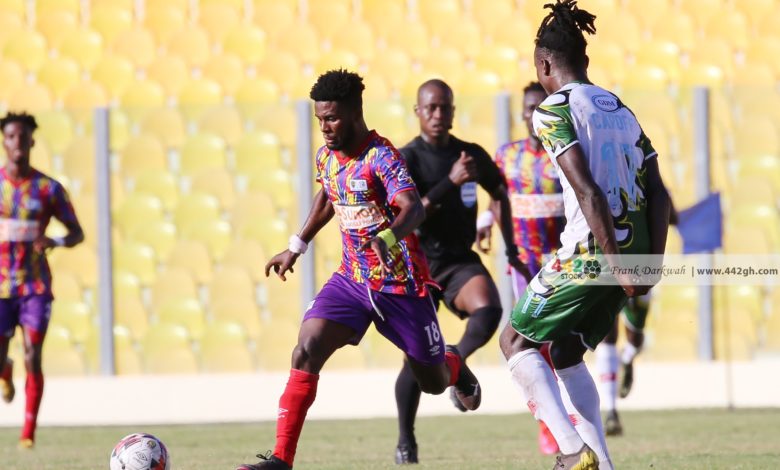 Champions Accra Hearts of Oak conceded a late goal to lose 1-0 to Karela United last weekend. Hamid Dufie smashed home the match winner from close range in the 93rd minute to condemn the champions to their third away defeat of the season.

This weekend, Hearts of Oak face another stern test from King Faisal as they continue to fight to improve their place in the League log and defend the title. The former African Champions hammered Eleven Wonders 4-1 at the Accra Sports Stadium before travelling to Aiyinase where they suffered a painful defeat.

Kofi Kordzie failed to score against Karela United but his recent form for the Phobians is quite impressive as he scored a brace against Eleven Wonders and added to his tally in their FA Cup win against Golden Kicks.

Coach Samuel Boadu’s side are finding goals from different sources aside top marksman Kofi Kordzie, with the likes of James Serwornu, Daniel Afriyie Barnieh and Kojo Obeng Jnr. finding the back of the net in recent matches.

Kofi Kordzie has scored 6 Premier League goals for the champions and expects to lead the line on Sunday.

King Faisal who led the League table for three weeks, dropped to fourth after losing 2-1 to Accra Great Olympics last weekend – falling seven points behind leaders Asante Kotoko who sit at the top of the table with 30 points.

Coach Nurudeen Amadu’s side are unbeaten at home but unconvincing results on the road has been their biggest problem in their title hunt, winning two, drawing one and losing four.

King Faisal started the season in a blistering manner by picking three wins on the spin (1-0 against WAFA, 3-1 against Aduana and 2-0 over AshantiGold) until they fumbled against Berekum Chelsea in a 1-0 loss at the Golden City Park on Match Day 4.

King Faisal are in anxious need for points after suffering three successive defeats to Eleven Wonders (2-0), Karela United (2-0) and Accra Great Olympics (2-1). Star man Zubairu Ibrahim who leads the scorers chart with 7 goals is coming into the match with a high reputation after scoring a hat trick for the Black Satellites in a friendly against Ada United on Wednesday.

The match is scheduled for 3pm kick off at the Accra Sports stadium and live on StarTimes Adepa Channel 247.

In other fixtures for Sunday:

Berekum Chelsea return home to play against Accra Lions. West African Football Academy who drew gialless with Bechem United will be at home against Bibiani Gold Stars at the WAFA Park while AshantiGold come off their 1-0 away win against Accra Lions as hosts of Dreams FC.

Fresh from their 2-1 loss to Bibiani Gold Stars, Legon Cities will play Eleven Wonders at the Accra Sports stadium. Real Tamale United clash with Karela United at the Aliu Mahama stadium with Medeama SC set to play at home against Elmina Sharks at the Akoon Park.